You Are Here: Home → 2008 → August → 24 → Protestant Bishops Appeal for Release of Detained Pastor

Members of the Council of Bishops of the United Church of Christ in the Philippines intensified their campaign for the release of Pastor Berlin Guerrero with a “Pilgrimage Walk for Justice and Freedom” at the Court of Appeals.

Members of the Council of Bishops of the United Church of Christ in the Philippines (UCCP) held what they called a “Pilgrimage Walk for Justice and Freedom for Pastor Berlin Guerrero”, Aug. 20 at the Court of Appeals (CA).

Guerrero has been languishing at the Cavite Provincial Jail for more than a year now. He was abducted May 27, 2007 allegedly by elements of the Naval Intelligence Security Forces. In an affidavit, the pastor said he was tortured in a safe house and was accused of being an officer of the Communist Party of the Philippines (CPP).

On the same day, Guerrero was brought to the Philippine National Police’s (PNP) Camp Pantaleon Garcia in Imus, Cavite. Only then was he informed by the police that he had been arrested for the murder of a certain Noli Yatco.

In a letter to the CA justices, the UCCP bishops called for a speedy resolution of Guerrero’s case. “We are certain that he is detained for political rather than criminal reasons,” they said. The letter was signed by 12 bishops.

The letter reads further, “Falsely accused, he [Guerrero] is victimized daily with separation from his family, the physical, psychological and spiritual stress of confinement, and the general denial of his liberty.”

Bp. Dulce Pia Rose of the East Visayas Jurisdictional Area said, “We are dismayed that the process is taking so long. Every day that Pastor Berlin is detained is another day that justice is denied to him.”

On June 14, 2007, the Protestant Lawyers’ League of the Philippines petitioned the Regional Trial Court Branch 19 inPastor berlin Bacoor, Cavite to release Guerrero and to quash the warrant of arrest and dismiss the information for murder filed against him. 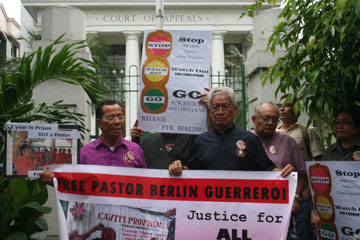 On Aug. 2, 2007, Justice Matias M. Garcia II denied the motion. On Aug. 24, 2007, former Sen. Jovito Salonga, together with Guerrero’s lawyers, filed at the Supreme Court a petition to nullify Garcia’s decision, to prohibit the lower court from proceeding any further with the case, and to order the dismissal of the information for murder against Guerrero.

On June 10, 2008, the Supreme Court resolved to remand the case to the CA. “In view of the seriousness of the allegations of the violations of the liberty and dignity of a citizen who is said to be under detention, and in order that this case be acted upon with dispatch, the court, instead of dismissing this petition outright, hereby resolves to remand the case to the Court of Appeals,” the decision stated.

On July 25, Justice Romeo Barza of the CA’s 12th Division, was assigned to Guerrero’s case. Last week Barza inhibited himself and the case was raffled again.

Bishop Jessie Suarez said, “And now we have to worry about the corruption allegations facing the Court of Appeals and the potential distraction or implications this may have on Pastor Berlin’s case. It is very hard to attain justice, but we will do our utmost to keep the attention of the court on his case. Our prayer for Pastor Berlin’s freedom must be matched by our best actions to appeal for justice.”

UCCP’s General Secretary, Bp. Eliezer M. Pascua, said, “We are here to remind justices and citizens alike that we remain vigilant in Pastor Berlin’s case and that all are accountable to God for our conduct,” said Pascua.

If the CA decides to dismiss the information for murder against Guerrero, he would be immediately released. Otherwise, the detained pastor would stand trial on the murder charge.

Pascua said, “It will be very disturbing seeing a pastor, who has committed his life to God in the service of God’s people, standing trial for murder. But, it’s really not so different than the story of Jesus and His disciples in the Bible. We hope and pray the case of murder will be quashed and that justice will prevail.” “We all feel that this case is a worthy struggle; the human and civil rights of all Filipino people are at stake,” added Pascua. 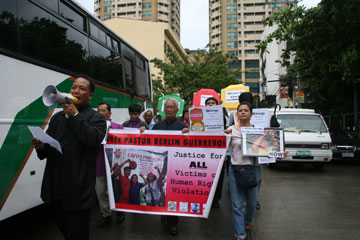 Meanwhile, Amie Dural, secretary-general of the Promotion for Church People’s Response (PCPR), recalled Guerrero’s active participation in the campaigns against the all-out war in Mindanao during the Estrada presidency and against charter change. “Kung malaya si Pastor Berlin, tiyak na kasa-kasama natin siya sa panalangin, talakayan at pagkilos para sa katarungan para sa mga biktima ng pagpaslang at sapilitang pagkawala,” (If Pastor Berlin is free, he would be with us in our prayer, sharing and actions for justice for the victims of killings and enforced disappearances.)said Dural.

She asked, “Bakit kailangang siya ang magdusa sa piitan samanatalang nananatiling malaya ang may pakana ng pamamaslang, pagnanakaw?” (Why does he languish in jail while the mastermind of killings and plunder continues to be free?) (Bulatlat.com)