Evelyn Milo, 24, is said to have committed suicide. Her aunt, however, said she had stab wounds and bruises. Evelyn even had strangulation marks on her neck.

Evelyn Milo or Ebang to her family and friends went to Dubai in October 2005 to work as a sales clerk. She came back to the Philippines to visit her family after more than two years, on February 15, 2008.

After a week though, she returned to Dubai to work again. Her aunt Anita Milo Macalintal recalled what Evelyn said before she left, “Dito sa Pilipinas, mahirap lalo na pag walang trabaho.” (Life here in the Philippines is hard, especially if you do not have a job.)

Anita said Evelyn wanted to have her own house and help them in their needs. 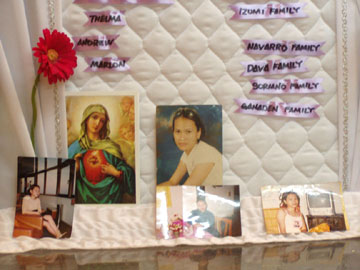 During the wake of evelyn Milo. (Photo by angie de Lara)

On August 5, Evelyn called and informed her that she would go back home to visit and would spend her birthday with them on August 15.

To their surprise, after four days, Evelyn’s employer, a certain Hashir, called up and said that Evelyn committed suicide. They were told that Evelyn jumped off from the ninth floor of the building where she was residing in Dubai.

Hashir also told Anita that Evelyn was undergoing dialysis. Anita told Bulatlat she does not believe that Evelyn was sick. “How could she leave the country if she was sick when she had to go through a medical checkup?” she asked.

Anita related that they immediately went to the office of the employment agency. A certain Victoria, the owner the agency, confirmed that Evelyn committed suicide. “Nagulat talaga kami, wala kaming nagawa kundi umiyak ng umiyak,” (We were shocked, we could not do anything but cry.) she said.

She then asked about the arrival of Evelyn’s body. Victoria told them it could take three to four months.

Anita said, “We cannot wait that long so I decided to go to the office of Overseas Workers Welfare Administration (OWWA).”

An officer of the OWWA called up the agency. She overhead the officer saying, “Anong nangyari? May kaso ka pala bakit hindi mo sinasabi? May namatay ka palang employee, heto nagrereklamo iyong kaanak.” (What happened? Why did you not inform us that you have a case? So one of your employees died and a relative is now here complaining.)

Anita said that because the phone’s speaker was on, she heard Victoria answer, “Hindi naman ‘yan nagpakamatay, pinatay ‘yan” (The employee did not commit suicide; she was killed.)

Anita said that they were asked to go back to the agency. Victoria told her, “Wag ka muna magpunta kung saan-saan.” (Don’t go anywhere else.) Victoria then gave her the contact number of Evelyn’s employer Hashir.

She then called up Hashir and pleaded for the return of Evelyn’s body. The next day, Hashir called back and informed them about the full details of the arrival of Evelyn’s body. Anita said Hashir promised to pay the expenses for the burial and to send Evelyn’s last salary. “Until now, we have not received anything from him,” said Anita.

Anita, together with Evelyn’s mother and another sister, went to the agency. Victoria told them, “Wala kaming pakialam sa bangkay kasi hindi naman namatay yun dun nagpakamatay sya.” (We have nothing to do with the body, she was not killed there, she committed suicide.)

Victoria told Evelyn’s mother, who was then hysterical, to stop crying. Probably because there were many applicants at the office, Anita said. They were then told to leave. Victoria gave them P300 ($6.53 at an exchange rate of $1=P45.925).

At the Ninoy Aquino International Airport (NAIA), they were asked to pay P200 ($4.35) for the quarantine fee. They only had P100 ($2.177) left from the money the agency gave them. The OWWA personnel came and paid for the fee.

When they reached the funeral, they requested to see Evelyn’s body. Anita said while crying, “Pagkakita namin sa bangka, nasindak kami kasi yung bibig nya may suntok tapos yung mga ipin nya ay basag-basag. Iyong leeg niya may bakas ng sakal, may saksak ang paa tapos maraming pasa sa katawan.” (When we saw her body, we were shocked. Her teeth were broken. Her neck had strangulation marks. She had stab wounds on her feet and had many bruises all over her body.)

As of press time, the autopsy is not yet available.

Anita said, “We want justice for Evelyn. We are asking the help of every one who could help us attain justice.”

She said they already sought the help of Senate President Manny Villar. “He promised us that he would ask the authorities to conduct an investigation,” said Anita.

Migrante International prepared a tribute for Evelyn, August 29. Families of victims of mysterious deaths also joined them. Together, they demand justice for their loved ones. (Bulatlat.com)