Raymond Manalo, together with his lawyer Rex Fernandez, filed criminal and administrative cases against his military captors September 12 at the Office of the Ombudsman, and a civil case at the Quezon City Regional Trial Court. 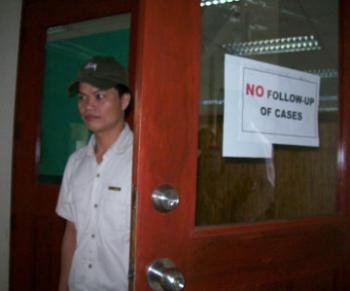 Administrative complaints for gross misconduct, grave abuse of authority, gross oppression and for acts unbecoming of a public official were also filed.

Other respondents were soldiers of the 24th Infantry Battalion of the Philippine Army and members of the Citizen Armed Forces Geographical Unit (CAFGU).

In his sworn statement, Raymond said they were abducted in San Ildefonso, Bulacan, and were detained in three military camps and two safehouses. They were first brought to Fort Magsaysay, Laur, Nueva Ecija before being transferred to Camp Tecson in San Miguel, Bulacan and later in a safehouse in Zambales. They were again transferred to the headquarters of the 24th Infantry Battalion in Limay, Bataan and finally, to another safehouse in Pangasinan where the brothers escaped on Aug. 13.

He also said that he personally saw Palparan participate in the torture of activists.

He said he had long been planning to file charges against the perpetrators. “Ngayon lang ako naka-recover sa trauma inabot namin.” (I have just recovered from the trauma we experienced.)

Raymond said they were subjected to various forms of torture: “Nilulublob sa tubig, minamartilyo ang kamay, hinahampas ng dos-por-dos, iba-ibang klase… Nariyang pasuin ng apoy, buhusan ng mainit na tubig, buhusan ng gasolina, paluin sa likod ng barbed wire o kadena.” (Our heads were forcibly submerged in water, our hands were hit with hammers, we were clubbed with wood 2inches wide by 2 inches thick, we had hot water and gasoline poured on us, we were whipped at the back with barbed wire and chains.)

He said the soldiers were forcing them to admit that they are members of the New People’s Army (NPA). The NPA is a revolutionary armed group under the Communist Party of the Philippines (CPP).