he Philippines will host the 2nd Global Forum on Migration and Development (GMFD) this October. Filipino migrant workers, however, deem that the forum will only aggravate their conditions.

Migrante International said that the GMFD “aims to further institutionalize labor exportation among impoverished countries like the Philippines.”

Connie Bragas-Regalado, chairperson of Migrante International and secretary general of the International Migrants Alliance (IMA), said, “This can only lead to further exploitation and intense commodification of migrant workers across the globe.”

The protesters held an assembly in front of the main gate of the University of Santo Tomas (UST) before marching toward Mendiola. They were blocked by the police at the corner of Morayta and Recto Avenue in Manila. 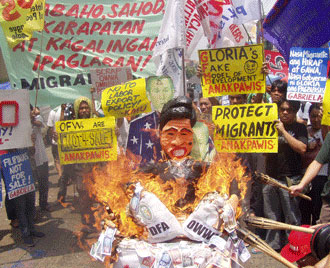 Members of Migrante International burn an effigy of Mrs. Gloria Macapagal-Arroyo as a sign of their condemnation to the government. (Photo by Angie de Lara)

Saying that there are 197 reasons why migration will not lead to development, Migrante International showed a tarpaulin depicting the 197 countries where overseas Filipino workers (OFWs) are present and are “routinely maltreated.”

Migrante Spokesperson Garry Martinez said Gloria Macapagal-Arroyo is a “hypocrite in selling herself as the face of migration.” Martinez criticized the Arroyo government’s policies. He said that even as the Overseas Workers Welfare Administration (OWWA) Omnibus Policy states that overseas Filipino workers (OFWs) should be given assistance, distressed migrants are often deprived of much-needed help from OWWA. 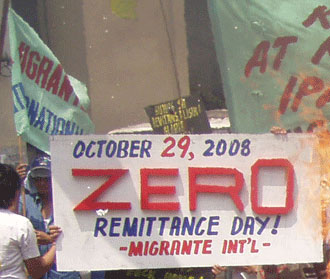 Joms Salvador, spokesperson of GABRIELA maintained that government officials are the ones who need to be subjected to psychological tests. “It is truly insane to insist on the baseless and erroneous thesis that the solution to cope with maltreatment from the hands of employers and neglect of Philippine government is to prepare migrant workers emotionally and mentally,” said Salvador.

The women’s group cited data from the DFA showing that more than 1,000 migrant workers have been repatriated after experiencing maltreatment from their employers. Salvador said most of these workers were domestic helpers.

Salvador deplored that most women migrant workers are vulnerable to abuse.

Martinez also revealed that the Arroyo government wants OFWs to sign a waiver before leaving the country stating that the Philippine government has no liability when OFWs face problems outside the Philippines. 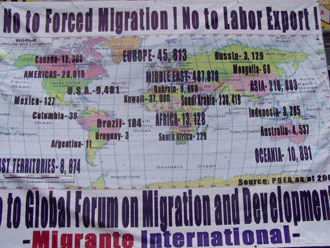 Meanwhile, Dr. Geneve Rivera, secretary-general of the Health Alliance for Democracy (HEAD) said the Arroyo government drives away the country’s doctors, nurses and other health professionals.

Rivera said the Arroyo government is more interested in earning billions of dollars from OFWs than in ensuring a good health care delivery system in the country.

She said that the Philippine government earns P25.5 million every day from charges exacted from 3,400 Filipinos leaving the country.

Regalado said migration in the country only “shows the economic failure of the Arroyo government.” It depends on the billions of dollars of remittances to keep the economy afloat, she said.

To counter the GMFD, the IMA will hold the International Assembly of Migrants and Refugees on October 27. Hundreds of migrants from different parts of the world are expected to attend. The group has also called for a zero-remittance day on Oct. 29.