Children of farmers in Guihulngan, Negros Oriental displayed worries and anxieties due to the current atmosphere in their communities.

Children in Barangays (villages) Trinidad, Imelda and Banwage underwent psycho-social therapy through different activities such as games and art activities, facilitated by professionals.

The children were engaged in games that expressed themselves and showed interactions with each other. They were also encouraged to draw how they perceive their lives, environments and their homes. 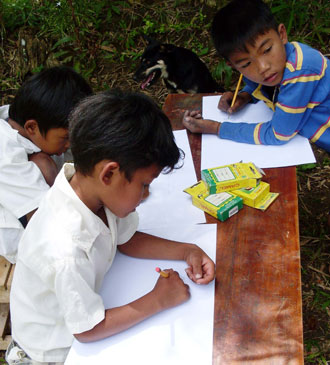 Children draw how they view their lives and their environment.

Among the children’s worries include education, lack of food and financial capacity of their parents to provide for their needs. There are cases where children are forced to either help their parents in the field or find their own jobs.

Dino (not his real name), 11, has stopped schooling. His father is a farmer in Brgy. Trinidad while his mother stays at home to take care of his five siblings. Dino is supposed to be in the fifth grade this year but his father asked him to help in the fields.

Dino’s father can not tend to his farm alone any more. Government troops in full-battle gear are always following him making him anxious and fearful.

Jefferey Ferrer, a psychologist and one of the facilitators in the therapy sessions, said, “Children who are forced to engage in activities that are beyond them, such as working to help augment the family’s income do not enjoy healthy childhood.”

These activities hinder them to be truly happy and achieve their own dreams, Ferrer added. 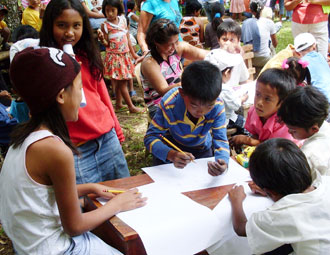 Sabijon’s children are affected by this. He no longer works in the farm nor does he see his family anymore because of the constant threats on his life. “Tungod niini, nabungkag ang akong pamilya, tungod lang sa ilang mga pasangil nga walay katarungan,” (Because of baseless accusations by the military, my family was broken), Erwin said.

His wife went to Cebu to work. She took with her their children.

Harassment against their parents

According to the facilitators’ reports, children showed insecurity and repressed actions. The atmosphere in their homes and communities contributed to this.

Many of the children who participated in the sessions have parents who were victims of repression and harassment by the military. They witnessed these harassment and repression. (Contributed to Bulatlat)