Continente added that with this way, too, the Arroyo government thinks it could hide the actual number of political detainees from the international community. 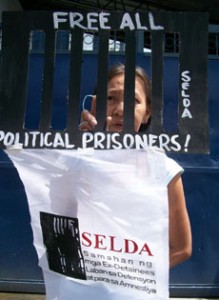 A protester holds a unique placard in front of the National Intelligence Coordinating Agency (NICA) headquarters in Quezon City.

Political prisoners are detained in overcrowded prison cells. The National Bilibid Prison (NBP) in Muntinlupa has a 4,700-capacity but regularly houses 12,000 prisoners, including political prisoners.

At the Manila City Jail, a cell is good for 75 people but there are 250 detainees in one cell. Randall Echanis, deputy secretary general for external affairs of the Kilusang Magbubukid ng Pilipinas (KMP or Peasant Movement of the Philippines) is detained there.

Continente said political prisoners are mixed with suspects of common crimes. He said this practice aims to inflict psychological torture on the victims. While inside prison, Continente said, the biggest enemy is one’s self. “You would ask why you have been charged with such crimes but you’ll get over it,” said Continente.

At the Bohol Provincial Jail, Continente said the police fired at the detention cells of political prisoners sometime in January this year. The eleven political prisoners were protesting the replacement of the jail warden when the incident happened. Luckily, nobody got hurt.

Continente said that Ipong was sexually molested at the age of 65. He said another prisoner in Bicol is suffering from mental disorder due to physical and psychological torture.

He said that some lawyers are not keen on handling cases of common crimes. If the charge was rebellion, Continente said, more lawyers volunteer to handle the case.

He denounced the creation of the Inter-Agency Legal Action Group (IALAG). National Security Adviser Norberto Gonzales and Justice Sec. Raul Gonzalez are part of the IALAG.

He said that fascist measures being implemented by the Arroyo government intensify as the Filipino people rise up against it. (Bulatlat)