Bongon thanked other workers and sectors for their support in the struggle of Bleustar workers.

Workers of Triumph International in Taguig City and members of the Pepsi-Cola labor union in Muntinlupa were there. National and regional leaders of KMU were also present, including those from Pamantik (Pagkakaisa ng mga Manggagawa sa Timog Katagalugan or Unity of Workers in the Southern Tagalog Region).

Students from the Polytechnic University of the Philippines – Taguig campus, artists from Sining Bugkos and Tudla, members of GABRIELA, Gabriela Women’s Party and Anakpawis also came.

Bongon said,“Sila ang tumulong para magtagumpay ang laban namin. Dahil sa kanila, lumalakas ang aming loob.” (They helped us to win our fight. Because of them, we have been emboldened.)

BMWLU President Marlon Vizconde said their struggle has just begun. “Hindi rito natatapos ang ating laban, hindi lamang para sa sahod, trabaho at karapatan.” (Our struggle does not end here; it is not only limited to the fight for better wages, jobs and rights.)

He said they have started organizing the residents near the RMT compound. “Huwag kayong mag-aalala, hindi kami magpapatumpik-tumpik.” (Don’t worry, we would not hesitate in the struggle.)

There are only two unions in 20 factories inside the RMT Compound. 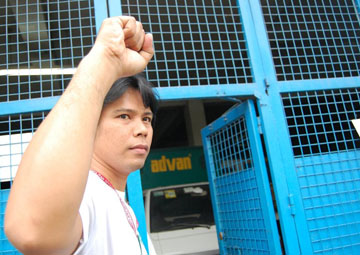 Elmer Labog, KMU national chairperson, said it is but apt to describe the workers who produce Advan shoes as advanced.

In the middle of the program, rain fell. Three to four people huddled together in each umbrella. The downpour became heavy when the workers of Triumph International were singing. But they went on. Even the audience remained.

It was already dark when the program ended. But the workers illuminate the night. As Anakpawis Representative Rafael Mariano described it, “Itong tagumpay na nakamit ninyo ay magsisilbing dagdag na karanasan at mga halaw ng maniningning na aral ng sama-sama at makauring pakikibaka ng uring manggagawa.” (The victory that you achieved would serve as additional experience and from it could be culled valuable lessons in the united class struggle of the working class.)