Meanwhile, Emmnuel Villanueva, vice chairperson of Filipino Migrant Workers Union-Hong Kong and secretary general of the United Filipinos in Hong-Kong (UNIFIL-HK) said they will also discuss the situation of domestic helpers, their campaign for higher wages and migrant workers’ rights. Villanueva has been working as a domestic helper for more than 17 years now.

Villanueva said,”While Foreign Affairs Undersecretary and Co-Chairperson of GFMD Esteban Conejos is broadcasting that the protection and welfare of migrants is the main concern of the GMFD, they have isolated us from the assembly.”

He opposed the idea that the GFMD is making the Philippines as the role model for migration. “Our experience of more than three decades of exporting labor was their basis for an efficient labor export program. But until now there is no development for us migrants and for our families.” 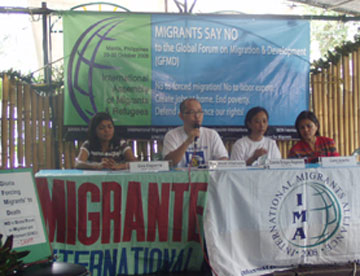 Villanueva criticized the composition of GFMD. He said that delegates will come from countries that are rabid violators of migrant rights.

He said that the US has implemented a massive crackdown on undocumented migrants. In Europe, Villanueva said that the new rules will affect undocumented migrants. He also hit Malaysia’s inhumane treatment of deportees from the Philippines and Indonesia. (Deportees from Sabah Endure Inhumane Treatment) “Let us not forget the South Korea, and the treatment they did to the leaders of Migrant Trade Union (MTU) who are citizens of Nepal and Bangladesh.

“If the GFMD is for us migrants why is it that no migrant worker will represent us in that assembly?” Villanueva said the GMFD is only after their remittances.