An independent international mission comprised of lawyers and judges said that while the Philippine government claims to have taken firm measures to address the problem of extrajudicial killings, including the establishment of various Task Forces, there have been no visible results.

An eight-member delegation from the Dutch Lawyers for Lawyers Foundation (L4L Foundation), which visited the country from November 3-12, 2008, concluded that the measures supposedly implemented by the Philippine government to address the issue of extrajudicial killings have not led to visible results.

This was part of the initial findings of the L4L’s International Verification and Fact-Finding Mission (IVFFM) on the Attacks against Lawyers and Judges released Nov. 12. 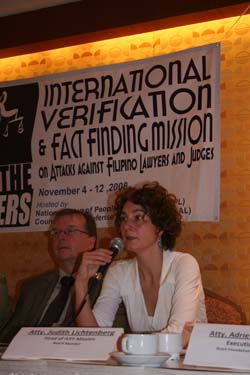 Judith Lichtenberg, head of the mission, shares their initial findings to the media. (Photo by Bulatlat)

The IVFFM is the second mission of the L4L Foundation to the Philippines. The first one, held in June 2006, came up with a report titled “From Facts to Action.” The 2006 mission concluded that the Philippine government failed to address the killings effectively and that Filipino judges and lawyers were threatened, harassed or even killed while carrying out their legal profession.

The report put forward several recommendations for the Philippine government, including taking steps to protect lawyers and judges and forming an independent body to investigate the killings.

Lichtenberg, head of the mission, explained the background of the IVFFM, “We were informed by the Philippine human rights groups that Filipino lawyers and judges are still facing threats and that even as the number of killings declined, killings still continue and that there is a poor record of convictions.”

The follow up mission sought to verify the status of cases of killed and harassed lawyers and judges, collect findings regarding new cases of threats, harassment and killings, and to evaluate the effectiveness of government measures to address the killings.

Lichtenberg who read the initial findings of the IVFFM said, “Apparently only one person has been convicted for these killings and that was in 2006. So impunity still seems to exist.”

She said, “In the cases we investigated in 2006, little or no progress has been made so far.”

Based on the monitoring and documentation of the National Union of People’s Lawyers (NUPL) and the Counsels for the Defense of Liberties (CODAL), 22 lawyers have been killed since 2001 and 15 judges killed since 1999.

In a separate statement, the NUPL said, “The Philippines has become one of the most dangerous places for lawyers and judges in the world since there are very few countries where 37 lawyers and judges are brutally murdered in a span of seven years, and, where the real perpetrators have not been held accountable for the crime.”

The IVFFM team noted that ‘there seems to be little or no coordination between the various Task Forces and agencies concerned as regards to the way of investigating or prosecuting the killings.’ Lichtenberg said that presentations by different government agencies showed inconsistencies in data.

“We observed a lack of trust among lawyers, judges, their relatives and civil society organizations as to whether the government is sincere in addressing the problem of these killings. Solving this problem clearly needs broad support of all layers in society,” said Lichtenberg.