Injustice and impunity are still trademarks of the Arroyo regime, said a human rights alliance in an annual report released to the media.

Injustice and impunity are still trademarks of the Arroyo regime, said a human rights alliance in a report released to the media.

In its 2008 report released today, Karapatan (Alliance for the Advancement of People’s Rights) said, “The rights to life, liberty, and security of Filipinos as enshrined in the UDHR [Universal Declaration of Human Rights] and our Constitution, remain a paper promise if state terror and abuse of power are not checked.”

The group released its report on the eve of the 60th anniversary of the UDHR and the tenth year of the United Nations Declaration on Human Rights Defenders.

According to Karapatan, 50 members and leaders of people’s organizations and party-list groups have been killed from January to October this year, bringing the total number of killings under the Arroyo administration to 977.

Marie Hilao-Enriquez, Karapatan secretary general, said, “The Arroyo government has still not taken any significant action to arrest this continued spate of killings.” 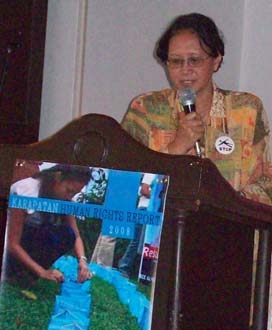 The drop in the number of killings, Karapatan deemed, is only a ‘tactical ploy to appease global public outrage and was never the result of any measure taken by government to arrest, prosecute and convict those allegedly responsible for the atrocities.’

“It is truly saddening to note that no one has been credibly convicted even if we are presented the false illusion that extrajudicial killings and enforced disappearances are on the downtrend,” Enriquez said.

Karapatan shared the Amnesty International’s observation that ‘majority of investigations [on killings] do not meet international standards as set forth in the UN Principles on the Effective Prevention and Investigation of Extra-Legal, Arbitrary and Summary Executions.’

Enriquez said, “Not even the generals and other military officers identified by the 2007 Melo Commission report for probable culpability in the atrocities have been adequately probed. What is worse is that they are coddled by the Arroyo regime.”