Filipinos in US, Canada, Hong Kong Join Call to Stop Attacks on Gaza

Filipino immigrants and migrant workers in the United States, Canada and Hong Kong joined protests calling for a stop to Israeli attacks on Gaza.

Filipino immigrants and migrant workers in the United States, Canada and Hong Kong joined protests calling for a stop to Israeli attacks on Gaza.

After more than a week of aerial bombings, the Israeli Army has moved into Gaza. As of press time, more than 500 Palestinians were reportedly killed.

Filipinos in New York City joined thousands in a long march from Times Square to the Israeli Consulate on Second Avenue in opposition to the continuing military offensives of the Israeli government on the city of Gaza, January 3.

Under the banner of Bagong Alyansang Makabayan (BAYAN) –USA, members from Filipinas for Rights and Empowerment (FiRE), Anakbayan New York/New Jersey, and the New York Committee for Human Rights in the Philippines (NYCHRP) expressed solidarity with the Palestinian people.

In a statement sent to Bulatlat, Berna Ellorin, BAYAN-USA secretary general, said, “The Filipino people are in complete and unconditional solidarity with the Palestinian people’s struggle for national liberation.” 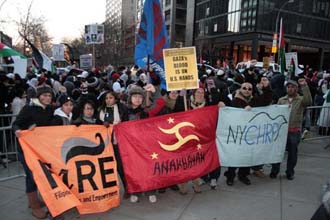 Filipino-Americans join the rally at the Israeli Consulate in New York to condemn attacks on Gaza. (Contributed photo)

During the rally and march to the Israeli Consulate, BAYAN USA members painted “Free Palestine!” on their faces and learned pro-Palestinian chants in Arabic from Palestinian youth.

BAYAN-USA said Israel remains the largest annual recipient of US economic aid in the world, billions of which are used to supply the weaponry, ammunition, and technological capabilities being employed in the Israeli military offensive against the Palestinians.