After being on strike for more than four months now, workers of the Kowloon Restaurant along West Avenue in Quezon City were able to clinch an initial victory.

After being on strike for more than four months now, workers of the Kowloon Restaurant along West Avenue in Quezon City were able to clinch an initial victory.

In its decision dated December 22, 2008, the National Labor Relations Commission (NLRC) Third Division ordered the reinstatement of all dismissed workers with full back wages. A copy of the said order was received by Kowloon workers through their counsels from the Pro-Labor Legal Assistance Center on January 20.

Seventy-three Kowloon workers were terminated by the management on Sept. 13 ,2008 following the decision by NLRC Labor Arbiter Aliman Mangandog declaring the workers’ picket protests as an “illegal strike.”

The workers staged picket protests during their break time on June 20 and 21 last year. The union has been asking for the implementation of the National Capital Region (NCR) Regional Wage Board Order No. 13 issued on August 2007; the order mandated an increase of P12 ($0.26 at the August 2007 exchange rate of $1=P46.07) in the daily wage and an emergency cost of living allowance (ECOLA) of P50 ($1.085).

In the decision, Mangandog also said the workers were considered to have forfeited their employment with the company and were even ordered to pay P40,000 ($868.24) as damages.

The decision stated that Manandog “seriously erred and gravely abused his discretion in holding that the workers engaged in an illegal strike despite the fact that they were just exercising their constitutional right to lawful picketing”. 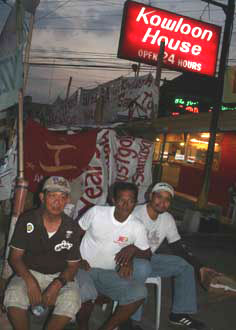 The decision further stated, “Labor Arbiter [Mangandog] …committed a serious error and gravely abused his discretion in penalizing the workers with the supreme penalty of dismissal despite the fact that they have been identified to have committed the supposedly illegal acts cited by the complainant [Kowloon management].”

The NLRC Third Division also said that the management should be penalized for immediately dismissing the workers despite the fact that the decision of Mangandog is not yet final and executory. Mangandog’s decision was issued Sept. 5, 2008. After eight days, the management terminated the 73 workers.

Edmund Navarosa, president of the Kowloon union, welcomed the decision.

Severino Gesto, the union’s secretary said, “Masaya kami [sa desisyon] pero hindi pa lubos.” (We are happy with the decision but not yet completely.)

Gesto said they will file a motion to inhibit Mangandog from the case.

He said that many of his co-workers immediately went home to bring the good news to their families.