Evanessa Valmadrid is one of the retrenched OFWs from Taiwan who trooped to the  National Reintegration Center for OFWs (NCRO), February 27, hoping to get the reimbursement for their airfare.

Most of the OFWs laid off from Taiwan paid for their own tickets which cost 5,500 NT each. The contracts of the OFWs stipulate that the employer and/or the recruitment agency should pay for their plane tickets in case of retrenchment or repatriation. 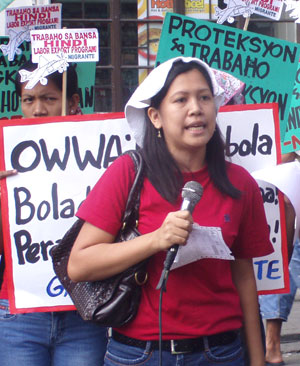 Evanessa Valmadrid, one of the retrenched Filipino workers from Taiwan, joins the picket protest in front of the Department of Labor and Employment to demand reimbursement of their air fare.. (Photo by Angie de Lara)

In an interview with Bulatlat, Valmadrid could not hold back her tears when she said, “Pinagpapabalik-balik lang nila kami after naming ma-submit mga forms na kailangan nila. Sabi sa amin sa OWWA, pumunta kami sa NRCO dahil nandito na ‘yung pera namin. Pagdating namin dito, wala pa rin…Pinaglalaruan lang nila kami” (They’re just giving us a run around after we submitted all the forms they required of us. The OWWA told us to go to NCRO to get our money. When we arrived here, we still did not get anything…They are just manipulating us.)

Artes Diaz, another OFW laid off from Taiwan, has the same sentiment. “Nauubos na ang savings namin sa transportation at pagkain kakapabalik-balik” (We are now running out of savings due to expenses on transportation and food going back and forth to this office to follow up.)

The retrenched OFWs denounced the Arroyo administration’s grand spin regarding a supposed assistance package for OFWs. “They won’t even reimburse our tickets,” they said.

Gina Esguerra, secretary general of Migrante International, said, “If President Arroyo thinks she can get away with her lies, she is dead wrong. Retrenched OFWs from Taiwan know the truth and are ready to unmask her and her economic resiliency plan for OFWs as a grand hoax.”

According to the Department of Labor and Employment (DOLE), the Arroyo administration’s response to the crisis includes the setting up of one stop-shop assistance centers and the  allocation of P100 million ($2,049,180) for a loan fund. Each OFW may borrow P50, 000 ($1,024)payable in two years with five percent interest.

“Our sisters and mothers were forced to leave their loved ones because the government failed to address the worsening problem of unemployment and poverty that beset our country. Yet in times of problems the Arroyo administration turns its back and even tries to deceive them by concocting useless and showcase livelihood loan programs,” Esguerra said.

Joms Salvador, spokesperson of Gabriela said, “Displaced OFWs should not be treated as beggars. The OWWA fund is money from the pockets of our migrant workers, and they should be able to access these funds if they need to.”

Salvador added that the job insecurity of OFWs places women migrant workers in situations more vulnerable to abuse. “President Gloria Macapagal-Arroyo has no other recourse in resolving the impact of the global economic crisis except to continue peddling Filipinos to work abroad despite that batch after batch of Filipinas have been coming home battered and abused.”