Artists from various genres converged last April 24 at the Ten 02 Bar in Quezon City for a cultural night against the Visiting Forces Agreement.

The event was the second leg of Artists Arrest the VFA, a bar tour jointly organized by the Artists’ Response to the Call for Social Change and Transformation (Artists’ ARREST) and the Junk VFA! Movement. The first leg took place last April 7 at the Conspiracy Bar and Garden Cafe, also in Quezon City. The next leg will be held on April 30 at Mag:net along Katipunan Avenue, Quezon City.

At the April 24 event, visual artists, poets and poetry performers, and musicians showcased their craft together. 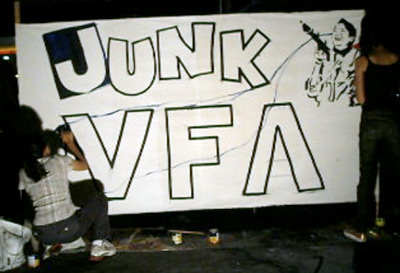 A group of painters did a mini-mural outside the Ten 02 Bar while poetry and music performances were taking place inside. Among those who did the mural were Con Cabrera, Recci Bacolor, Rustum Casia, and Bong de Leon.

Inside, Rita Baua of Bagong Alyansang Makabayan (Bayan or New Patriotic Alliance) was among the poetry performers. She recited two poems: “Aba! Ginang Gloria!” by Mykel Andrada and “Utang” by Au Susano.

Renato Reyes Jr. of Bayan, Sarah Maramag of the College Editors Guild of the Philippines (CEGP), and Aki Merced were among those who gave musical performances.

The event was also an occasion for the launch of a chapbook of poems, an essay, an illustration, and photographs related to the VFA. Among the contributors are award-winning poets Gelacio Guillermo and Raul Funilas. (Bulatlat.com)