You Are Here: Home → 2009 → May → 2 → Family, Migrants Group Hold Last Ditch Effort to Save OFW in Taiwan from the Firing Squad

Family, Migrants Group Hold Last Ditch Effort to Save OFW in Taiwan from the Firing Squad

A day before the Appellate Court of Taiwan would hand down its verdict on May 4, Migrante International and the family of Alcaraz would hold a prayer rally to save the life of Cecilia.

It was October 2008 when Rosalinda Armia Pisueña appealed to the Arroyo government, in a press conference, to work for the immediate release of her 47-year-old sister Cecilia Armia-Alcaraz, who was sentenced to die by firing squad in Taiwan. Undersecretary for Migrant Workers’ Affairs Esteban Conejos then claimed that the Philippine government was already coordinating with its counterpart in Taiwan to save the life of Alcaraz. But her fate remains hanging in a balance.

Jerome, 19-year-old son of Alcaraz, said that they were somehow able to meet their daily needs even before his mother left for Taiwan. But since she is a single mother to four children, Alcaraz was forced to work abroad to be able to send her children to school. 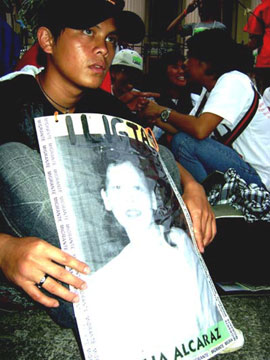 Jerome told Bulatlat that the last time he talked to his mother was during the fiesta in their hometown in Liliw, Laguna last April 2008. He remembers how her mother’s voice was so excited and happy. So they were shocked to hear that months after they talked their mother was charged for killing broker Chou Mei-yun and was sentenced to die by firing squad.

“Paano naman magagawa ng nanay ko yun eh ang liit-liit ng nanay ko tapos yung pinatay niya daw ay napakatangkad?” (How could my mother do such a thing when she is very small compared to the victim who happens to be very tall?) Jerome asked.

“Naniniwala kami na si Cecilia ay na-frame up. Naniniwala kami na hindi rin siya nabigyan ng tamang legal assistance at kung bakit malamang na humantong tayo na dalawang deny na appeal sa verdict na firing squad,” (We believe that Cecilia was framed up. We also believe that she was not given proper legal assistance [by the Philippine government] and that is why it is highly probable that the second appeal to reverse the verdict would be denied again.) Gary Martinez, chairperson of Migrante International said in a press conference held last April 28, 2009.

Martinez said that Alcaraz was supposed to visit Chou Mei-yun, a broker who helped foreigners find work in Taiwan and a friend of hers too. But upon arriving there, she found two men, whom she recognized, inside the victim’s apartment. The two men told her to drag the cold, dead body out of the apartment. Scared and terrified, Alcaraz did what she was told to do.

The Taiwanese police claimed that they accidentally deleted a video that could have identified the men who have possibly killed Chou Mei-yun, a broker who helped foreigners find work in Taiwan and a friend of Alcaraz. “Kamalasmalasan mo naman talaga! Coincidence ba talaga o sadyang dinelete?” (Alcaraz is very unlucky. But was it really deleted by accident or on purpose?) Martinez asked.

Alcaraz gave the contact numbers of the two men who broke into the victims’ place at the approximated time when Chou Mei-yun was murdered but the police officers said they were unable to contact them.