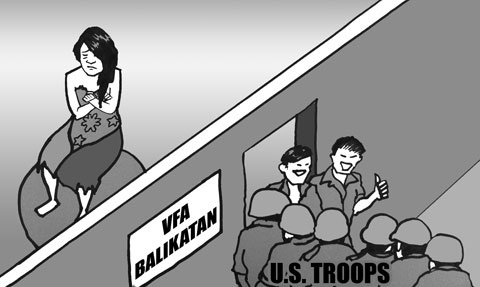 The recent surfacing of a Filipino who claimed she was raped by a US Marine, so soon after the overturning of Lance Corporal Daniel Smith’s conviction by the Court of Appeals, shows that for so long as the Visiting Forces Agreement (VFA) is in force and the Balikatan military exercises are being held, there will be more victims of rape and other forms of sexual aggression by US soldiers. Meanwhile, the iniquitous character of the VFA discourages victims from pursuing their case in court – thickening the shield of immunity protecting US troops in the Philippines who, as it is, already enjoy protection from the country’s laws, no thanks to the Philippine government. In the end, it is Philippine sovereignty that turns out to be the biggest rape victim here.