MANILA — Despite the lack of quorum and the continued opposition from media organizations, House Bill 3306 or the Right of Reply Bill (RORB) was subjected to plenary debates during the week. 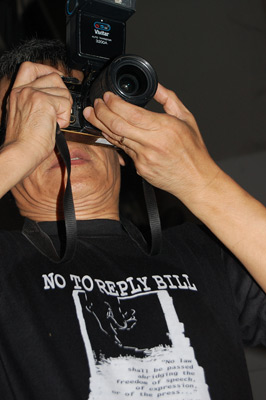 In a statement, Nestor Burgos, chairman of the National Union of Journalists of the Philippines (NUJP), denounced the apparent attempt to railroad the passing of the RORB in the House of Representatives.

The media group maintained its opposition to any bill or law that seeks to require the media to publish or air statements or reactions of persons who are subjects of news reports or commentaries.

“The very notion of legislation that dictates media content is anathema because it is unconstitutional, an infringement on the freedoms of the press and of expression,” Jaime Espina, NUJP vice chairman, told Bulatlat in an interview.

“The bill, ‘watered down’ or not, will intrude on editorial independence and makes a mockery of press freedom that Filipino journalists have fought and died for,” Espina said.

The bill, Espina asserted, is “just a step removed from the much reviled and belittled anti-rumor mongering law of the dictator Ferdinand Marcos, which sought to prevent people from spreading, by word-of-mouth, the realities of life under martial law” that the oppressed or shutdown independent media at the time could not.

Espina said majority of media reports include the position of the other side as a matter of course. “But while it is true that there are those who may deprive the subjects of articles and commentaries the opportunity to reply, this, too, is covered by the right to free expression,” he said.

“Responsibility or the lack of it is a matter of ethics and conscience and cannot be legislated,” Espina added. “If it could be, we would probably see a great number of our lawmakers and public officials disqualified from running for and holding office. For media, credibility is the key to success. Lose it and you lose your audience and, eventually, your business.”

The NUJP official said that “onion-skinned officials who feel they are not being given a fair shake by this or that media outfit can always seek recourse through other media outfits.”

Espina added that “this bill is nothing more than an attempt by those in power to control the independent Philippine press and acquire for themselves a platform to cover up their wrongdoings and bombard a hapless populace with their often inane ideas.”

But Abante said the bill “is about the responsible exercise of the constitutional freedom of the press and reasonable protection of the constitutional right to due process, as well as the protection of one’s honor and dignity. Its main objective is to instill responsible and fair exercise of the freedom of speech and of the press and to afford the accused or criticized of any wrong or improper conduct the right to reply to the accusation or criticism in the same media outlet.”

Espina retorted that “it is hypocritical of Abante and the bill’s proponents to rail against supposed media irresponsibility, specifically by so-called ‘blocktimers,’ when it is a fact that politicians, including those most aggressively peddling this measure, are the most notorious purchasers of blocktime and deploying paid hacks to attack their foes.”

Espina said that “in retrospect, would our lawmakers agree to deprive themselves of the congressional impunity behind which many of them launch the most vitriolic and unsubstantiated charges against their opponents? They are the last persons who should preach about the ‘responsible exercise of the constitutional freedom of the press’.”

Abante said media practitioners should appreciate the ROR bill because in the end this would improve their credibility and objectivity.

To this, Espina responded: “Abante forgets that, all too many times, it is precisely because of media’s credibility that they become the refuge of last resort for people seeking assistance against the abuses of their supposed leaders.”

One of the amendments proposed by Abante is the inclusion of the clause regarding respect for editorial judgment.

Section 2 of the amended version states that an affected person’s reply will be published or aired “…as far as practicable and respecting the editorial judgment and availability of space or airtime.”

Section 5 further states the length of the reply is “…subject to editorial discretion.”

Espina deemed the provisions as “absurd” as the bill continues to penalize “the exercise of that judgment in determining what is fit or not to be printed or aired.”