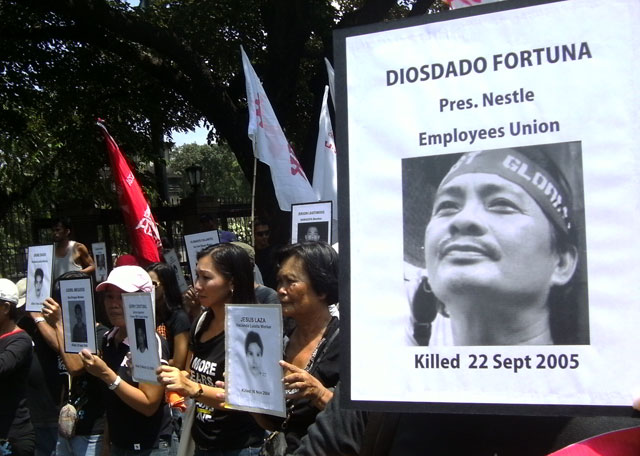 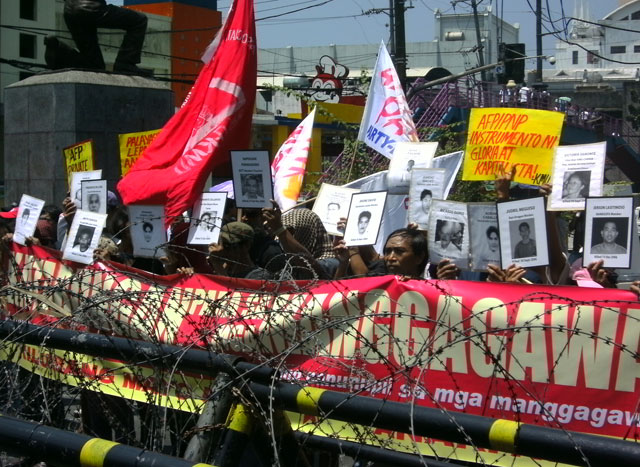 Carrying the pictures of their loved ones, relatives of slain and arrested union leaders and unionists demanded justice for workers who suffered “state-sponsored” repression under the Arroyo regime during a protest march to Mendiola last Sept. 18.

The said protest, led by Kilusang Mayo Uno (KMU), was part of the campaign to highlight violations of labor rights in the run-up to the International Labor Organization (ILO) high-level mission on Sept. 22-29. ILO representatives will conduct the probe on extra-judicial killings, harassment, red-tagging and slap suits against workers in response to a KMU complaint filed in 2006.

“Today, we remind the Arroyo government and her armed forces of their atrocity against our loved ones. We also remind the public that workers have suffered repression under Arroyo that is far worse than under the Marcos dictatorship,” said the wife of slain EMI-Yazaki union president Gerry Cristobal.

“We hope that the upcoming mission will bring justice closer to the workers and expose the devious means by which the government crushes unions and other labor organizations,” wife of slain Nestle Cabuyao leader Diosdado “Ka Fort” Fortuna added.

Fortuna, who led the strike against the illegal dismissal of workers and the refusal of Nestle Philippines to grant retirement benefits, was shot dead by suspected hired personnel from the police and the military. Cristobal was killed on March 10 last year after surviving two murder attempts. The assassin was later identified as SPO1 Romeo Lara, bolstering suspicions that it is the police and the military that undertook the killings of labor leaders.

KMU said the killing of 92 labor leaders is the most gruesome attack on the labor movement and the clearest violation of ILO Convention 87 on the Freedom of Association and Protection of the Right to Organize.

“Through the ILO mission, workers and labor advocates will ensure that Arroyo will be held responsible for the grim record of trade union repression in the country. We will present evidences that will earn her regime the strongest condemnation locally and abroad,” KMU chairman Elmer “Bong” Labog said.