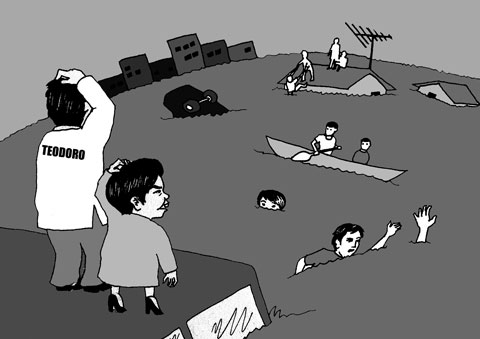 Disaster (Un)Preparedness. By all indications, tropical storm Ondoy was one of the most devastating storms to hit Metro Manila and surrounding provinces in the last four decades. While it did not pack strong winds, it poured rain in one day that was equivalent to a month’s average. However, one would think that the Philippines, being within a typhoon belt and the Pacific rim of fire, would have been prepared for natural disasters. But the devastation caused by Ondoy showed that not only is the government ill-equipped, it is also ill-prepared. Worse, there are reports that the Arroyo government used its emergency fund for the president’s trips abroad.
By FLON FAURILLO
(Bulatlat.com)