Notes from Morong 43 Hearing: AFP Now Trapped in Its Own Lies

MANILA — When the 43 arrested health workers were brought to the auditorium of the Court of Appeals, each was handcuffed to a soldier. If they were going to the rest room, they would be accompanied by the soldier assigned to them. Only when they enter the rest room would their handcuffs be removed. This went on for some time, before lawyers asserted that the handcuffs be removed and the detainees allowed to confer with their lawyers and family members.

It was almost 3 pm when the hearing started. Atty. Romeo Capulong raised his objection to the handcuffs on the detainees even while inside the court room and the inability of the lawyers to properly confer with their clients. He asked the justices not to allow martial law to be imposed inside the court.

As they entered, some detainees managed to smile and raise their clenched fists to the family members and supporters inside the court room. I saw one detainee try to hug his wife, even while he was seated and handcuffed to a soldier. As they hugged, the soldier was right there beside them.

Atty. Capulong also moved that the detainees be transferred from Camp Capinpin to Camp Crame because of the many cases of ill-treatment and difficulty of lawyers to access their clients. The court said it would deliberate on the motion at the appropriate time.

Thus the hearing for the petition of the writ of habeas corpus began. The presiding justice asked if the 43 were present inside the court room. Another justice asked that all detainees stand so that they may be counted. The 43 stood, all of them accounted for. 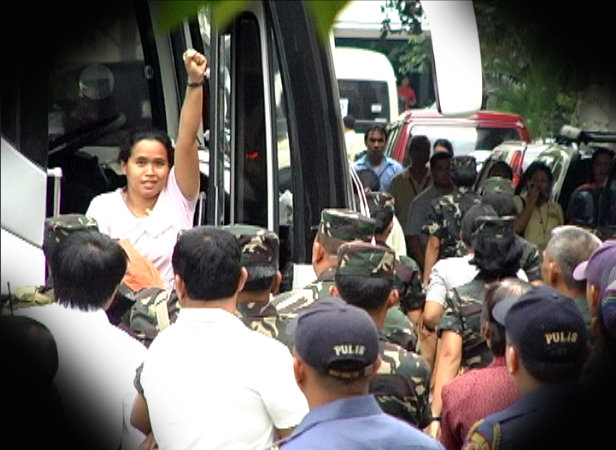 Jane Beltran-Balleta, one of the Morong 43, emerges from a military bus shackled to a soldier but in high spirit. (Photo by Cris Balleta / Kodao Productions)

Atty. Capulong then asked the court if he can begin the presentation of evidence and witnesses. This was objected to by the Assistant Solicitor General who said that the habeas corpus hearing was not the proper venue to hear evidence pertaining to the conditions of confinement or if there were improprieties in the arrest.

The judge eventually ruled in favor of the petitioners and allowed the presentation of one witness, upon the request of Atty . Capulong. The 43 were also allowed to submit their affidavits detailing their arrest and detention.

The Assistant Solicitor General asked for a “concession” from the court by asking the media to leave the room and to hold the hearing under executive session. The presiding judge ruled that the hearing was a public hearing and that the media is allowed to cover the event, minus cameras.

Dr. Alex Montes, a 62-year-old surgeon and one of the trainers in the health seminar, was called to the witness stand. He gave an account of his arrest and the events since he was brought to Camp Capinpin.

He said that at around 6 am, an undetermined number of soldiers barged into the resort owned by Dr. Melecia Velmonte. They were taken by the armed men but were not informed of their offense. The armed men proceeded to the conference room, he said. He described the situation as disorganized, with people running all over the resort. He was later handcuffed and blindfolded and led to vehicle. The arresting officers did not inform him why he was being taken or where we was being taken. He said they traveled for an hour and a half.

Atty. Capulong asked Dr. Montes what the effects of the handcuffs and blindfolds had on him. He said that he could not walk alone, and had to suffer the indignity of having someone else lower his pants and underwear for him to be able to pee.

Among other things, Dr. Montes related that he was handcuffed and blindfolded until early evening of February 7 (nearly 36 hours) when he and the others were subjected to inquest proceedings. The inquest appeared to be a farce since they were only called out one by one, informed that they were being charged with illegal possession of firearms and explosives and afterward, the prosecutor from the Department of Justice left.

Dr. Montes said during interrogation, he was brought outdoors to what appeared to be some cliff or inclined plane. He was repeatedly asked questions about his alleged affiliation with the NPA. During several sessions, he was asked if he knew Tirso Alcantara or Ka Bart. His interrogators said they saw him in Luneta, meeting with two other people, talking about military strategy. They said he was part of the Military Commission of the NPA.

Dr. Montes did not eat from the time he was arrested (Feb. 6), up to the time his blindfold and handcuffs were removed (Feb. 7) . He believed that the drinks given to him were laced with some substance because he could feel them around the mouth of the cup.