MANILA — State security forces hosed down some 80 protesters, including relatives and colleagues of the “Morong 43” during a demonstration in front of the Gate 2 of Camp Aguinaldo this morning. 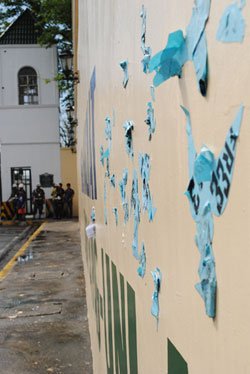 The protesters pasted these cutouts of doves on the camp’s wall when soldiers hosed them down. (Photo courtesy of Hustisya!)

Led by the group Hustisya! (Victims of the Arroyo Government for Justice), the protesters were by the wall of the gate, posting blue cutouts of doves printed with the name of the 43 detainees when the soldiers hit them with a water cannon. The Morong 43 are the health workers who were arrested by soldiers on Feb. 6 in Morong, Rizal.

“We join the relatives of the 43 as they call for their loved ones to be freed. The longer this administration stays the more there will be human rights violation,” said Evangeline Hernandez, spokesperson of Hustisya.

Several women who were mothers of the detainees were among those who were drenched, including Ofelia Beltran, whose daughter Jane was among the 43. Ofelia is a daughter of the late labor leader Crispin Beltran. 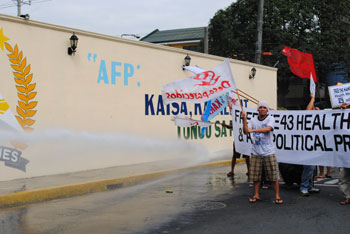 Supporters of Morong 43 being hosed down at Camp Aguinaldo (Photo courtesy of Hustisya!)

Desaparecidos, a group of families of the disappeared, also marked the third anniversary of the abduction of Leo Velasco, a consultant of National Democratic Front abducted in Cagayan Deo Oro City on Feb. 19, 2007. His daughter, Lorena, chanted “Surface my father Leo! Free the 43 health workers!”

Santos said her father is a pioneer of community based health programs in Cagayan Valley during the martial-law years.

The Health Alliance for Democracy, the Katribu partylist, and Bagong Alyansang Makabayan joined the protest. Katribu said that among those detained were indigenous peoples health workers, an Igorot and a Mangyan.

“In effect, the government is depriving the indigenous peoples of the services from the detained health workers,” said Nelson Mallari of Katribu partylist. 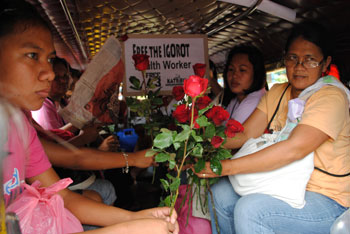 Some of the protesters brought flowers with them to the protest. (Photo courtesy of Hustisya!)

The rallyists denounced the AFP’s disruption of a peaceful demonstration. Earlier, the AFP’s loud speaker at the gate played popular music aimed to drown out the protesters’ speeches.

“So this is how the government conserves water?” said a speaker, referring to efforts by government to curb the effects of a dry spell caused by El Nino. The families and protesters proceeded to Camp Capinpin in Rizal to visit the detainees.

“To Ms. Gloria Arroyo and to the AFP, under your counter-insurgency program Oplan Bantay Laya, you treat the genuine servants of the people as criminals. But you are the ones who truly deserve to be behind bars,” Hernandez said. (Bulatlat.com)