MANILA — Mikaela Marie turned three years old last February 5. Her father, Reynaldo Macabenta, was on a health training that day but he promised her that he would come home the following day for her birthday celebration. She waited but soldiers and policemen prevented her father from coming home.

At around 10 p.m., Rey’s wife, Ma. Christina or Maricris, received a text message from Rey’s colleagues at the Council for Health and Development (CHD) telling her that something happened. It was only the following morning that Maricris came to know about Rey’s arrest.

Rey works as a driver for the CHD, a nongovernment organization dedicated to building community-based health programs (CBHPs). He was among the 43 who were arrested by around 300 combined elements of the police and military in Morong, Rizal, on Feb. 6. Along with the others, he was handcuffed, blindfolded and brought to Camp Capinpin. The 43 were branded as members of the New People’s Army (NPA). 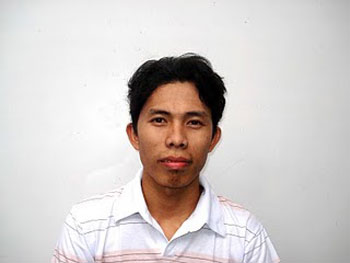 Reynaldo Macabenta: The silent type (Photo courtesy of Council for Health and Development)

Upon hearing the news of Rey’s arrest, Maricris was shocked. “Rey has been to many urban poor communities, accompanying his colleagues at the CHD in conducting medical missions and health trainings. I did not expect that something like this would happen,” Maricris told Bulatlat.

Rey has been the CHD’s driver since 2003. He also takes on other tasks in the office.

“Helping others has now become a crime,” Maricris said, in reaction to the military’s allegations. “It hurts me… They [military] could not even produce evidence,” she added.

Rey and Mariciris grew up together inside the Religious of Good Shepherd (RGS) convent in Quezon City. Both of their parents worked at the convent. Rey himself worked there as a driver and as a seller at the bakeshop. The two got married in 2000.

The couple has two daughters. The eldest, Barbie Abigail, is seven years old.

Maricris describes her husband as a loving father. “He loves his children so much. Whenever he comes home, he would play with them. They would play computer games or watch television together,” Maricris said.

Rey would always check on the studies of his eldest daughter, now in Grade 2. “He would always guide her in her assignments,” Maricris said. “He is more patient [with the kids], too.” 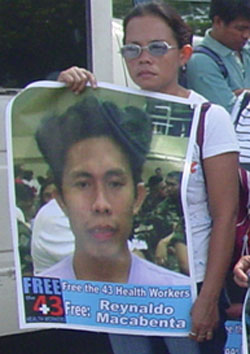 Rey would also bring home something for the kids. “He brings them sandwiches and tetra-pack juice. He could have eaten those himself but instead he would give them to his daughters,” Maricris said as she wiped her tears. “I just miss how he took care of us.”

Maricris said her daughters, especially their eldest, always ask when their father would come home. “She [Barbie] has been sad since and would always cry. They are the most affected.”

She had taken her two daughters to Camp Capinpin to see Rey. However, Rey told her not to take the children to the camp again. It turned out that the military has been threatening Rey that they would harm his family.

“The soldiers took his wallet and they saw our family picture. They were telling Rey that they know our whereabouts,” Maricris said.

Fearing for her children’s security, Maricris talked to the school’s principal and requested for a leave of absence for her eldest daughter.

Maricris said Rey has been subjected to continuous interrogation. “They [soldiers] would ask him names of persons… They insisted that he is a member of the LFS [League of Filipino Students]. They would hit him and he felt that he was being electrocuted at times.”

Rey is also a good co-worker, his colleagues at the CHD said.

“He is the silent type and is shy maybe because he grew up inside the convent,” said Vicky Neri. During lunch time, Vicky said, Rey would still hesitate to eat with them. “That’s how shy he is.”

“He is very responsible and would take on any task given to him. He does not know how to say ‘No.’” Vicky added.

Katha, another colleague, agreed. “You can always rely on him. Even during weekends, he would always be ready to fulfill tasks without complaining.”

“He is a loving father. He would always talk about his daughters,” said Katha. “When one of his children gets sick, he becomes frantic and worried,” added Vicky.

Maricris said even now, Rey would always think about them. “He would ask me if I am tired and would always say I have to take a rest.”

She visits Rey every day. They are allowed to talk for only 20 minutes per visit.

“Even if this is painful, I try to be strong for the kids. I also do not want Rey to see me crying. I will not stop until he finally comes home,” Maricris said.

Rey missed her daughter’s third birthday. This March 17, the couple would mark their 10th anniversary. “I hope by then, he would be free,” Maricris said. (Bulatlat.com)