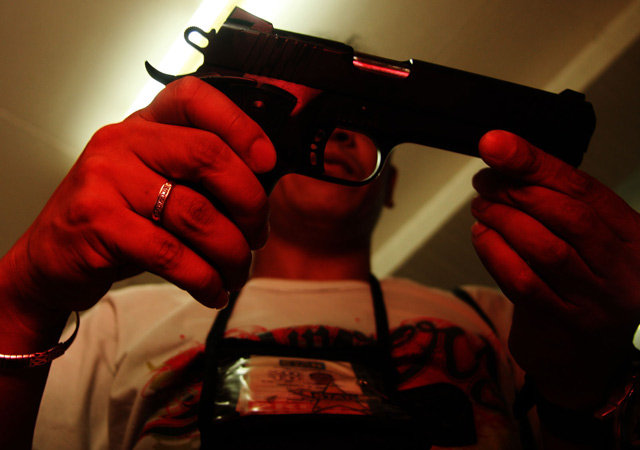 Text and photo by ARTEMIO A. DUMLAO
Bulatlat.com

BAGUIO CITY — Rather than be cowed, a journalist prefers to be armed for protection, at the heels of another media killing, the second this week.

Broadcaster-anchorman Joselito Agustin, 37, more popularly known as “Aksyon Lito” of DZJC Aksyon Radyo in Laoag City, Ilocos Norte, was shot dead by motorcycle-riding assassins Tuesday night. He died early morning Wednesday, making him the 139th journalist killed since 1986 and the 102nd since President Gloria Macapagal-Arroyo came to power in 2001, according to the National Union of Journalists of the Philippines (NUJP).

Police said Agustin and his nephew, who always went with him at the radio station, were driving home along the boundary of Laoag City and Baccarra town at around 9 p.m. when two unidentified gunmen came close and began firing at them. Agustin suffered four gunshot wounds from a 45-caliber pistol, while his nephew is now being treated for gunshot wounds on his foot and leg.

Earlier, gunmen armed with assault rifles strafed the house of Agustin in barangay Natba, Bacarra town apparently to scare him.

Agustin’s killing came after broadcaster Desidario Camangyan of Sunshine-FM in Mati, Davao Oriental, was shot at close range by an unidentified gunman Monday night, while hosting an amateur singing contest in Manay town.

Camangyan immediately died from a single shot to the head, witnessed by the audience, which included his wife and 6-year-old son, according to NUJP. (Bulatlat.com)