You Are Here: Home → 2010 → July → 3 → News in Pictures: Groups Stage Torch March to Demand Justice for Cardeño; Court of Appeals Hears Petition for Writ of Amparo 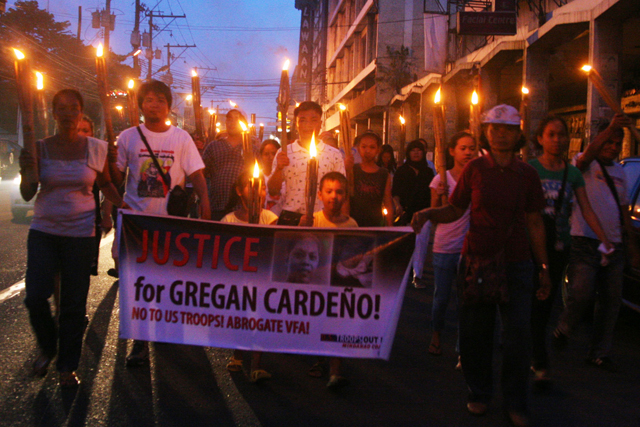 DAVAO CITY — Various progressive groups led by Bagong Alyansang Makabayan staged a torch march on Friday in Davao City to demand justice for Gregan Cardeño, a Filipino interpreter who was found dead inside US troops’ barracks in Marawi City. The group also demanded for the immediate pull-out of the US troops in the country.

Cardeño died under mysterious circumstances on February 2, barely two days after being hired as an interpreter for US troops under the Joint Special Operations Task Force (JSOTF)-Balikatan. The US troops’ barracks is situated in Camp Ranao, Datu Saber, Marawi City, home of the 103rd Infantry Brigade of the Philippine Army. The Philippine National Police of Marawi immediately concluded that Cardeño committed suicide by hanging himself, echoing what the US troops told the police when the latter reported the death. 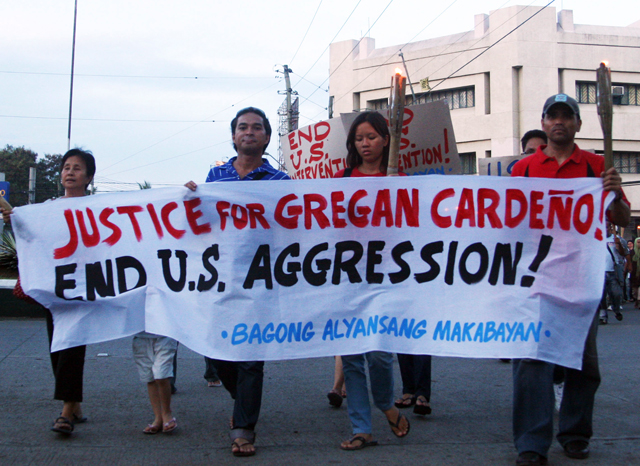 At the hearing of the petition for the writ of amparo at the Court of Appeals in Manila on Thursday, the human rights alliance Karapatan joined other organizations and victims of human rights violations in urging the government to properly investigate the death of Cardeño, as well as the killing of a close family friend aiding in the investigation, WESMINCOM Military Police Commander Maj. Ignacio Javier, who was gunned down on the day the Commission on Human Rights conducted a re-autopsy on Cardeño’s remains on March 25.

Cardeño’s family filed for the petition for the writ of amparo on April 27 at the Supreme Court and was granted on June 22. The petition prayed for protection of the family members who have been receiving threats since the incident, inspection of the barracks where Cardeño’s body was found and production of all documents and evidences pertaining to Cardeño’s and Javier’s death, in court. (Photos by Karlos Manlupig/Bulatlat.com)