MANILA — In the Philippines, there is today an alarming trend on incidences of abortion that, because these are forced to be done clandestinely, have also often been unsafe.

A research project of Gabriela-Negros published late last year in book form, “The Realities and Experiences of Women on Unsafe Abortion in the Philippines,” provides a descriptive analysis of the contexts, incidence, issues, actual practices and the legal environment for abortion. It also determined the impact of abortion on affected women, their families and their communities.

The research team led by Prof. Virgilio R. Aguilar and Dr. Rowena V. Bañes from the University of St. La Salle in Bacolod City and Gabriela-Negros consolidated some “long-kept stories and silenced pain of women who had abortion in the Philippines,” said research project director Nenita Cherniguin.

In an interview with Bulatlat during the book launch, Prof. Aguilar said he was surprised by their own findings. he said the research has broadened his view of the circumstances that pushed women to undergo unsafe abortions. He said he wanted to conduct a follow-up research.

A key finding of their research is that despite being publicly regarded as immoral and illegal, abortion is actually increasingly being accepted within families and communities in the Philippines. The study noted that women who had undergone abortion view the major institutions in society, particularly the government and the Church, which are supposedly vested with responsibilities to uphold the human rights of every citizen, as “the ones perpetuating structures and systems that hinder the full realization of a just, humane and gender-responsive society.” 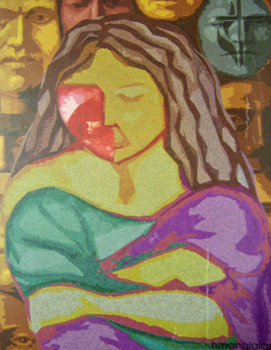 The Gabriela research on abortion confirmed the numerous earlier findings on the “wide practice of abortion in many communities in our country despite the severity of the law.” The study also affirmed that “it is not easy for women to come to a decision to undergo abortion.”

The book detailed how women who underwent abortion “experienced the ordeal of an emotional roller coaster ride before, during and after they had abortions. Yet, despite their own personal belief and that of their family, church, and community that this act is illegal and a ‘mortal sin’ by society’s standard, most of them have to resort to abortion as a way to deal with their economic deprivation, while some choose abortion because of experiences related to physical illnesses and others because of painful sexual experiences,” said then Gabriela Women’s Partylist Representative Liza Maza.

Considering that the country’s health care system is “inadequate to address even the primary health care needs of the people,” Maza said the “reproductive health care especially of women is in a more depressing state as it is given lesser priority by the government and the family.”

Abortion in the Philippines is generally considered as “illegal, immoral, unethical and socially stigmatic.” Anyone who commits abortion generally draws social disapproval or condemnation, said the Gabriela researchers. Yet, they noted that various reports in recent years, including their findings, showed that despite the stringent anti-abortion sentiment in society, induced abortion in the country, although found to be generally unsafe, “continues to proliferate particularly in big or metropolitan urban areas.”

The number of women who had induced abortions and were hospitalized due to post-abortion complications was also significantly high. In particular, noted Gabriela, many women especially the poor and the marginalized, seek clandestine abortions that put their health at higher risks.