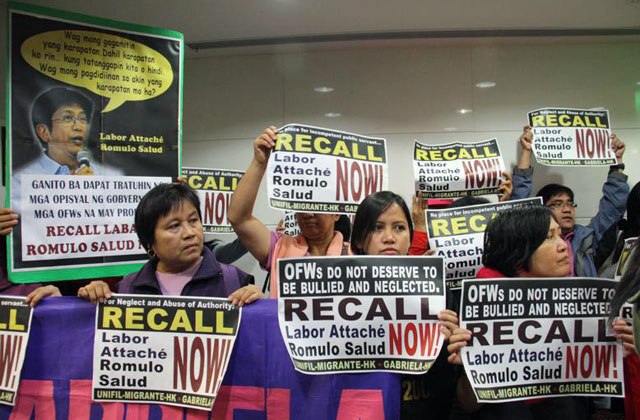 HONG KONG — “More than 100,000 already viewed the YouTube clip and indignation was the overwhelming response of most viewers. In one afternoon alone, we gathered more than 4,000 signatures. The OFWs and the people have spoken and this is what we wish to deliver: Recall Salud Now!” said Eman Villanueva, secretary-general of the United Filipinos in Hong Kong (UNIFIL-MIGRANTE-HK), during a picket-protest at the Philippine Consulate General on November 4, condemning Labor Attaché Romulo Salud’s rude treatment against an OFW and the Philippine government’s neglect of migrant rights and welfare.

Agnes Tenorio, a first-time domestic worker in Hong Kong, sought the help of the Philippine Consulate General after her contract was illegally terminated by her employer. In a recorded conversation between Tenorio and Labatt Salud, the latter raised his voice, saying in Filipino: “Don’t use the word “right”. Because it is also my right if I am going to accept you or not.”

Department of Labor and Employment (DoLE) Secretary Rosalinda Baldoz has recently announced that the department will conduct an investigation, but UNIFIL-MIGRANTE-HK expressed their fears on how the probe will be conducted given the recent statements of Baldoz that could imperil the credibility of the inquiry and eventually absolve Salud. 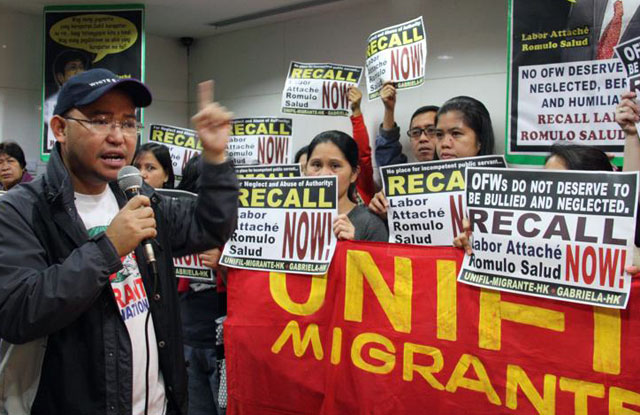 “This is a departmental investigation and the statements of Secretary Baldoz do not allay our fears and worries. At the very least, Labatt Salud should be suspended during the investigation to prevent his use of his office and its resources to impact the integrity of the probe,” Villanueva said. 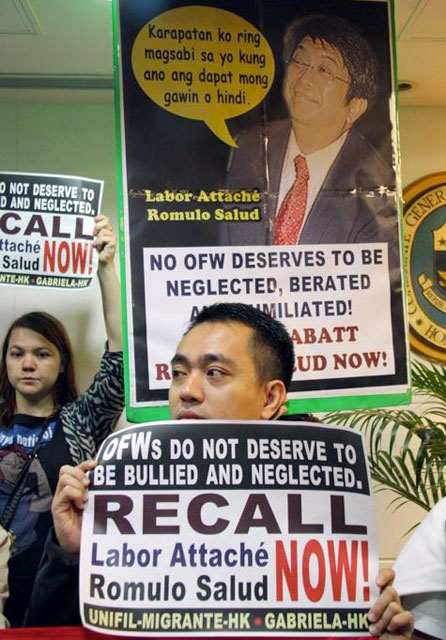 “Representative Luz Ilagan of Gabriela Women’s Party has called for a congressional inquiry to be conducted as soon as session resumes next week. This should be supported and pushed through. At the core of this issue is the neglect of a government official to an OFW in need. His grave abuse of authority should not go unpunished and we expect the PCG-HK, DoLE and Malacañang to do no less for Tenorio and all aggrieved Filipino migrant workers,” Villanueva said. (Photo courtesy of UNIFIL-Migrante-HK / Bulatlat.com)