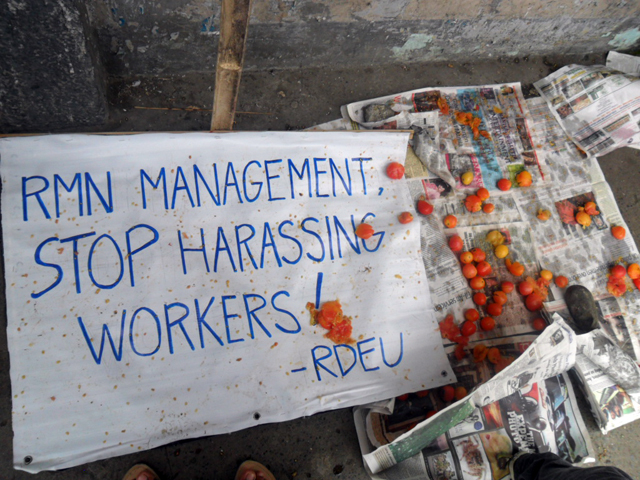 DAVAO CITY — Members of the Radio Mindanao Network Davao Employees Union (RDEU) protested outside the Radio Mindanao Network (RMN) station at the corner of Bonifacio and Anda streets on January 4 to air their grievances against continued workplace repression, citing the network management’s tactics of preventing the upcoming certification election and the possible sacking of another employee who is sympathetic to the union.

During the program held in front of the station, union members pelted tomatoes at a streamer bearing the words ‘Repressive Media Network.’ Union leaders demanded the network management to respect their right to form and join trade unions and stop the harassment of fellow workers.

“They used flimsy reasons, like making it appear that the members of our union are not of the rank and file. They also made it appear that their favored union, the one which did not have any Collective Bargaining Agreement (CBA) for many years now, is still active when it fact it is now defunct,” RDEU president Rey Hernan Fabe said.

Fabe explained that the defunct union, Mindanao Congress of Labor (MCL-Tupas), was used by the network management to block their attempts for a certification election. MCL-TUPAS filed a motion to dismiss RDEU’s petition for certification election at the Departmemt of Labor and Employment (DOLE)-Region XI on the basis that they have an existing CBA. But contrary to such claims, the office of the Assistant Regional Director of the DOLE-National Capital Region issued a certification on October 15 that that they did not have on file any CBA that MCL-Tupas claims to have.

The protest rally was staged the day before the scheduled meeting called by national network officials with RMN-DXDC’s FM station manager Rico Jumuad.

RDEU members fear that the management might sack Jumuad who has been supportive of the union. the him, as they did with former whose employment was unceremoniously terminated by one of the network owners last September.

Last year, one of the network owners sacked AM station manager Mario Maximo Solis and RMN-DXDC Davao senior anchorperson Alex Roldan, while program director Jessie Casalda and news director Elgin Damasco were forced to resign due to pressures from the management.

Last November, two broadcasters from Bombo Radyo-Davao filed cases of illegal dismissal at the National Labor Relations Commission-Region XI against their network management. Dennis Lazo and Art Borneo were dismissed from work after more than 20 years of service with Bombo Radyo company. 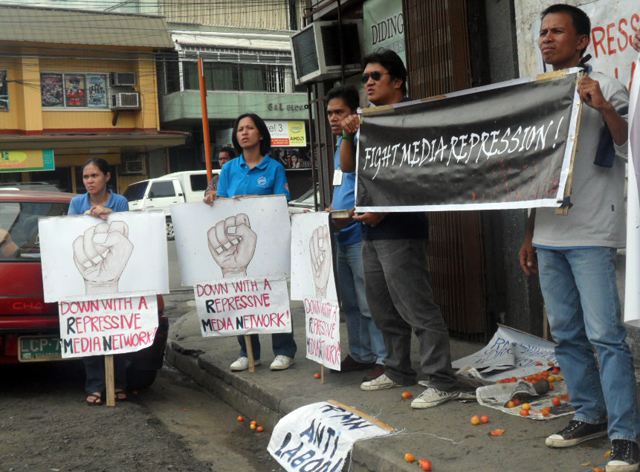 The National Union of Journalists of the Philippines (NUJP) Davao City Chapter condemns the current prevailing practice of media network owners against journalists. It also called on DOLE to order the holding of certification election of RDEU members and demanded RMN officials to respect the rights of media workers, emphasizing that any attack on media workers’ rights is an attack on the freedom of the press.

“Poor and underpaid as they are and lacking security of tenure, media workers are forced to work under unfavorable conditions. This has been made worse by the fact that worst violators of the media’s political and economic rights remain unsanctioned,” NUJP-Davao said in its statement.

“Forming a union is one of the last recourse that the members of the media have taken in order to protect their employment. They have resorted to form a union as an avenue by which they could bat for just wages and favorable work conditions, but it looks like, employers such as the Radio Mindanao Network (RMN) are showing signs of depriving even this right to them,” NUJP-Davao added. (Photos courtesy of NUJP-Davao Chapter /