MANILA — Media workers of an independent audio-visual group decried the harassment by the local police during the violent demolition of an urban-poor community in San Juan, Metro Manila.

At around 9:30 a.m. on Jan. 25, Godson Escopete of Tudla Productions was taking video of the demolition from a roof. When the demolition team threw teargas, Escopete took off his shirt to wipe his eyes. He was then arrested by the local police and brought to the precinct. In a video taken by Kodao Productions, Escopete is insisting that he is a member of the media covering the demolition. He was ignored.

At the police station, Escopete’s colleagues reiterated to the authorities that he is a member of the press. After 30 minutes of negotiations, he was released.

Also among those arrested was Diane Marie Solmayor, a community radio broadcaster in barangay (village) Corazon de Jesus. The local radio was set up on Jan. 21 in partnership with the organization of residents Samana. Solmayor was released only on Jan. 28. The police took away their equipment, including megaphones, wires, amplifier and microphone. 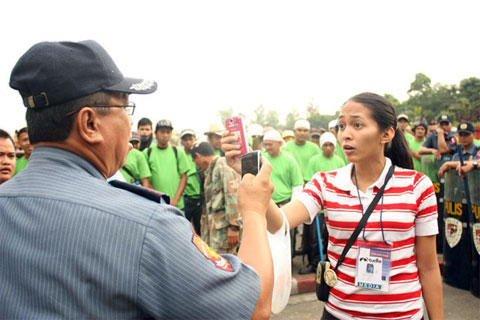 On Jan. 26, Tudla Productions executive director Lady Ann Salem went back to the community for coverage. As she was taking a video of the policemen, a police officer named Supt. Arcallana  took photographs of her and asked her if she is a legitimate member of the press. While this is happening, other policemen and members of the demolition crew cheered Arcallana on. He even said that he has been a police for 30 years and that he attended a three-day training on human rights.

Salem asked Arcallana if he took photographs of all members of the media and he said “No.” Arcallana went on to say he had the right to do what he wanted.

Another policeman told Salem and her colleague to replace their “low-tech camera.” Salem was then using her Sony Bloggie, a pocket camcorder with high-definition video.

“What happened is not a good precedent not only for independent, alternative or citizen media workers but for the whole media community,” Salem told Bulatlat.com. She added that the police should not discriminate against members of independent media groups.

Salem also said that San Juan Rep. JV Ejercito had publicly said that Salem and her colleagues are among those who instigated the local residents to protest. Salem said Ejercito had called them militants, who, after instigating protests, wore media IDs. The architect hired by the Ejercitos to build the “White House” city hall also called them communists masquerading as members of the press. 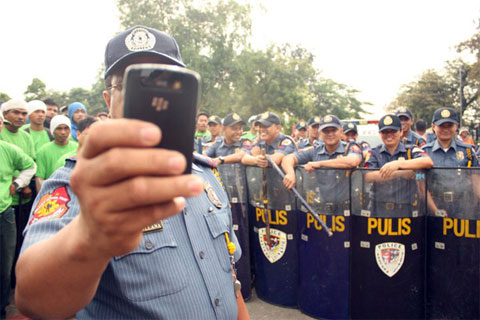 Tudla Productions has been documenting the plight of the marginalized sectors in society, including workers, peasants, and urban poor. It is registered with Securities and Exchange Commission (SEC). It has organized numerous film and media festivals.

“We condemn the red tagging,” Salem said. “They want to divert the issue and hide the many human-rights violations they committed that day.” Salem said it is obvious that the San Juan local government clearly wanted a media blackout on the issue.

Salem said her group has been documenting the issue of urban poor residents in San Juan as early as August last year. The group made newsreels, launch public photo exhibits, film showings, among others.

It is not the first time that members of Tudla Productions were harassed. In May 2009, while covering a demolition of an urban-poor community in Muntinlupa City, members of the local police took away their camera, battery and tapes.

“If authorities or other government agencies could intimidate other members of the media, we are not intimidated by them. We choose to document the issues of the oppressed and the marginalized, especially if their stories are not at all told by the mainstream press,” Salem said.