Pamalakaya, the fisherfolk group, said the government should stop “the national auction of coastal resources to multinationals and transnational corporation,” saying such a policy would worsen the impact of climate change.

The Pamalakaya leaders said the privatization and conversion of fishing grounds have eroded the capability and capacity of coastal communities to confront the challenge and impact of climate change and extreme weather phenomenon such as La Nina and El Nino. 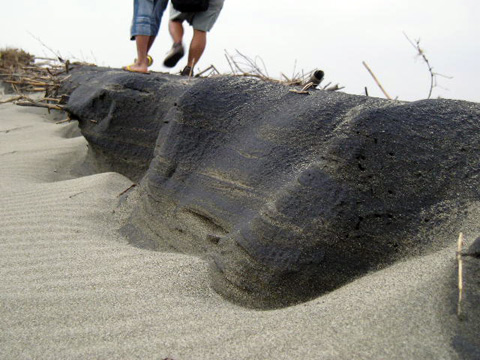 The group said that Aquino should immediately take action to ban magnetite mining in the coastal waters of Eastern Visayas region.

Based on reports from Pamalakaya-Eastern Visayas, of the 107 offshore mining applications in the regions, 17 are applied for magnetite mining which covers several municipalities of Samar, Leyte, Southern Leyte and Biliran.

Magnetite is a magnetic and very dense mineral of iron important for the steel industry. High-grade magnetite is used in many chemical processes including the production of iron sulfate, which is used to purify water in many major cities. Magnetite’s weight per volume makes it an important source of aggregate in the production of heavy concrete. Heavy concrete is used from the construction of baffles and containment tanks in nuclear power plants to things for everyday use such as counter weights in household washing machines.

According to environmental group Kalikasan-PNE, if these magnetite mining applications are approved by the DENR and Malacañang, it would promote widespread community displacement, further diminish the coastline, reduce fish catch to rock bottom levels, and decrease productivity since magnetite mining in coastal areas are inherently destructive to the environment.

Many studies reveal that black sand mining in coastal areas results to coastal erosion, inundation of communities, and degradation of marine ecosystem. Offshore mining of magnetite in Cagayan can increase vulnerability to floods as magnetite holds the sand together. The absence of magnetite in the sand can deplete and erode the coastal and near-shore areas.

Grand Total Exploration and Mining Corporation also has another application covering 5,752 hectares in the municipalities of Biliran, Cabucgayan, Caibiran, Culaba and Leyte, all in Leyte. Then there is Mt. Mogan Resources and Development Corp. applying for operations covering 3,022 hectares (Dulag, Leyte), another 15, 781 hectares in Tanauan, Tolosa, Dulag, Mayorga, MacArthur and Abuyog.

The exploration for magnetite would cover more than 17,000 hectares of municipal coastal waters in San Miguel Bay that would encompass five coastal municipalities in Camarines Sur—Sipocot, Cabusao, Calabanga, Tinambac and Siruma.

“Magnetite exploration will result in a complete ban of municipal fishing activity and the destruction of fishing resources in San Miguel Bay,” he said.” We strongly urge the DENR chief in the national office to reject the application of Bogo Mining Resources and order the mining firm to get out of San Miguel Bay,” said France.

The Pamalakaya leader said that while still waiting for the approval of the DENR permit for exploration, the technical personnel of BMRC has already started drilling operations in the five coastal municipalities to determine potential of magnetite. France said about 30,000 holes were drilled by mining personnel of Bogo since it applied for permit on November last year.