For Love of the Beautiful Game

By MAUREEN A. HERMITANIO
Bulatlat.com

BACOLOD CITY — A new era in Philippine football has dawned and I was there to witness it.

The instant I learned that the first leg of the Asian Football Cup (AFC) qualifying match between the Philippines and Mongolia would take place at the Panaad Stadium in Bacolod City, I knew I had to be there.

I religiously followed the national team’s campaign at the Suzuki Cup last year and even though they failed to reach the finals, I was happy that many Filipinos became more interested in the team and in football as a sport.

February 8, 2011, I arrived in Bacolod City, a day earlier than the scheduled match. I was there not just as a fan but also as a journalist, a reporter/photographer covering a live international football match for the first time.

A press conference of team managers was scheduled that day. I went to the venue earlier than the call time, hoping to catch a glimpse of the Azkals and if I get lucky, to have photo ops with them. When I entered the hotel, some of the team members were at the lobby — Rob Geir, Anton del Rosario and other young foreign-born Filipinos whose names I couldn’t recall at that time. I’m not sure if the women they were with are their WAGs (“wife and girlfriend” in soccer parlance) but I’m sure of one thing: I got star struck.

That time, I was in a dilemma — whether to act as a giddy football fan girl or a composed journalist. I opted for the latter. I patiently waited and kept my cool even as the players passed by. I saw more Azkals — Roel Gener, Ian Araneta, Paolo Pascual, Patrick Hichrinsen and the others. 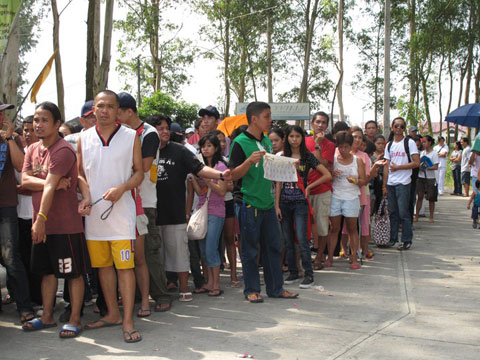 Fans line up for free tickets outside the Panaad Stadium. (Photo by Maureen Hermitanio / bulatlat.com)

February 9, 2011, the day of the match. I went early to the Panaad Park and Sports Complex to take photos. Panaad Stadium is located in a village called Alijis, about 20 minutes from downtown Bacolod. It is the adopted home of the Philippine Men’s National Football Team.

Outside, a long queue of people was waiting, hoping to get free tickets. A phalanx of police and soldiers was on guard. Security was so tight I needed to flash my AFC accredited media ID every time to get past security officials. Inside, the stadium was not exactly as I expected. Judging from the criteria set by FIFA and other international football federations, our home stadium is obviously physically inadequate. It looks old and worn out. No wonder we didn’t get the accreditation to host the AFF Suzuki Cup Philippines-Indonesia semi-final match last year.

Though Panaad Stadium has been previously used during the 2005 SEA Games and 2007 ASEAN Cup and has become venue to many local football matches, many improvements had to be done.

I went back downtown and met with Bacolod-based photojournalists. After waiting for them prepare their equipment — cameras, lights, etc. — and a quick coffee, we went back to Panaad.

When we arrived, the heat had already turned up. The atmosphere outside the stadium was festive. Loud music was playing. Peddlers sold Azkals shirts and memorabilia, water and food. Fans wore white shirts and painted their faces with the colors of the Philippine flag. Inside, fans filled the grandstands. It was a football feast. Everybody was excited and looking forward to the historic match. It was really a day of national pride. 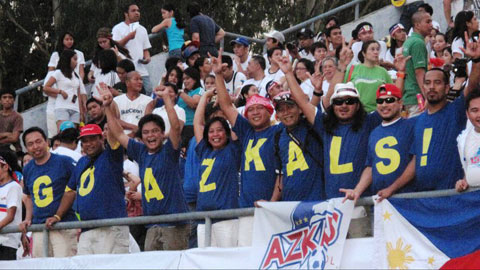 Fans go wild. It was really a day of national pride. (Photo by Maureen Hermitanio / bulatlat.com)

Minutes counted like hours and hours counted like days while we were waiting for match to start. I was supposed to sit on the bleachers at the media box with other reporters but I opted to join the photographers’ group. PFF officials gave us an official AFC bib and briefed us on guidelines on where to take photos during the game. In between taking pre-match photos, I Tweeted updates.

More than an hour later, the Azkals came out of the dugout for their final warm up. In a blink, the crowd went wild. Frenzied fans, mostly students and females, started shouting the names of Fil-Brits Phil and James Younghusband and keeper Neil Etheridge — probably the most popular players in the national team.

It was indeed a coverage of a lifetime. I was just meters away from the team, almost just an arm’s length away from them. As an amateur photojournalist, I felt really an amateur. I was in the company of veteran photographers who all ran and clicked their cameras too fast. As I fumble with the settings of the semi-professional camera that I just borrowed, I was too worried that I wouldn’t be able to take good shots.

The real live action began at seven pm. I knew history was unfolding that night and I was at the perfect spot, just outside the pitch near the goal and corner kick areas. On the first minute of the match, I immediately switched to fan mode. Still clutching the camera, I sat comfortably on the pavement and just watched.

Watching the game from the ground was awesome. I saw the actions and raw emotions of the players. I heard all the shouts and chants of the crowd. From where I sat, it was a totally different view compared to just watching a match on TV or from the bleachers. Occasionally, I cursed Mongolia’s goalkeeper for his saves and shouted “sayang” during the many missed chances of goals. 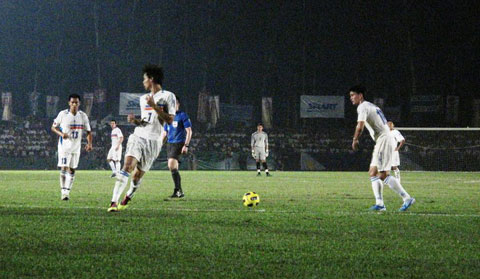 The Azkals won over the Mongolian Blue Wolves. (Photo by Maureen Hermitanio / bulatlat.com)

Then came the first goal from Barotac Nuevo native Emelio “Chieffy” Caligdong at the 43rd minute. After clearly slotting the ball in a rare nutmeg move, Chieffy passed in front of us, running with both of his arms stretched, as though flying. The look on his face was priceless and the cheering of the crowd was deafening. By this time, I turned off the camera and stopped taking photos. Like every Filipino watching the match that night, I just shouted and jumped to celebrate the goal.

I have watched hundreds of football matches on TV and the Internet — from the World Cup, La Liga and English Premier League. I didn’t mind if the commentary was in Spanish or if the match was scheduled in the wee hours, I would not miss an important game.

But in Bacolod, I realized that nothing compares to cheering for your own national team.

The next 45 minutes of the Azkals-Blue Wolves match was more exciting. I wished Mongolia would not equalize and that another goal would be scored. I took more photos, cheered and shouted.

After Phil scored the second goal minutes before the match ended, we were all running to take shots of the players’ celebration. That was it, the Philippines won against Mongolia.

When the final score was announced, the revelry started. People from the grandstand gathered at the pitch to dance and watch the spectacular fireworks.

Azkals team captain Aly Borromeo proudly carried the Philippine flag as he ran on the track. It was a fabulous moment and I just couldn’t help myself. I congratulated and shook hands with Ian Araneta, who politely replied “Salamat.”

I am happier now that football is finally getting the national attention and (hopefully) the support it deserves. The government must improve and develop more stadiums and ensure the training of more homegrown players. It must support all the national teams and players working hard to give pride to our country.

The Azkals’ performance and the warm reception of Filipino fans last February 9 showed that we can excel in football.

Football is not a fad or a passing fancy. It’s a lifestyle, a passion and dream. Filipinos can be big in football. All we have to do is believe.