You Are Here: Home → 2011 → February → 14 → On the Resumption of the GPH-NDFP Formal Peacetalks: SELDA Calls for Release of All Political Prisoners (PR)

On the Resumption of the GPH-NDFP Formal Peacetalks: SELDA Calls for Release of All Political Prisoners (PR)

On the eve of the resumption of the formal peacetalks of the Government of the Republic of the Philippines (GPH) and the National Democratic Front of the Philippines, the Samahan ng Ex-Detainees Laban sa Detensyon at Aresto, the organization for former political prisoners, today called for the unconditional release of the 344 political prisoners in 67 jails and detention centers nationwide.

Fr. Dionito Cabillas, secretary general of SELDA, said that the Philippine government should work for the immediate release of the political prisoners, as they are victims of illegal arrests, torture, detention, and were charged with trumped up and fabricated cases.

“Their cases are no different from the case of the Morong 43, all ‘fruits of the poisonous tree.’ Some have been in jail for more than five years already and all are victims of the vilification and legal offensives of the Arroyo government and the state military and police forces against legitimate organizations,” Cabillas added.

He urged the immediate release of the detained NDFP consultants and other persons protected by the Joint Agreement on Security and Immunity Guarantees (JASIG) as a sign of goodwill in the continuation of the peacetalks and for humanitarian reasons.

Cabillas cited Angelina Bisuna Ipong, a peace consultant and a lay missionary in Mindanao, who was tortured, sexually abused and is on her 6th year of detention and Randy Malayao, a peace consultant from Cagayan Valley, who was abducted and tortured in 2008. Both Ipong and Malayao are among the 14 peace consultants who are still detained. Ramon Patriarca and Leopoldo Caloza are also among the NDFP consultants whose releases are being sought. Patriarca and 2 political prisoners from Bohol and Cebu will commence in their fasting from February 15 to 21, 2011, to call for the immediate release of all political prisoners (please see their press statement below). 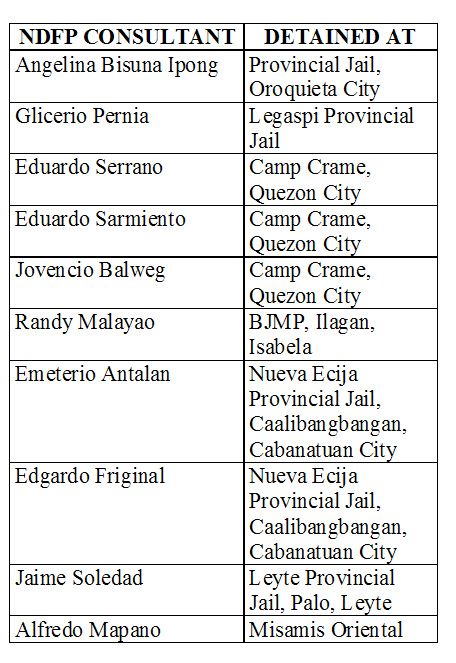 By subsisting on water and 5 biscuits a day for one week, we wish to call on President Noynoy Aquino to:

1. Order Justice Secretary Leila de Lima to immediately draft the necessary mechanisms to review all cases being faced by the 350 political prisoners still languishing in the various detention facilities all over the country. Three weeks ago, DOJ Secretary De Lima was quoted in answer to calls for the review of the cases filed againsts political prisoners as having said, “ We have thought of that but we haven’t had the time to really put mechanisms in place!” (NPA Leader not a peace talk adviser, insist Gov’t, PDI Jan 24, 2011).

2. Instruct the negotiating panel of the Government of the Philippines (GPH), now in Oslo Norway resuming its formal peace talks with the National Democratic Front (NDF) to uphold the validity of past GPH-NDF signed agreements including those made in 2001, 2004, and 2009 urging the immediate release of scores of political prisoners based on legal grounds and humanitarian considerations.

More than one month has passed since the last day of the so-called military rebels implicated in the 2003 Oakwood Mutiny, 2006 Fort Bonifacio stand-off and 2007 Manila Peninsula seige was freed from detention. Yet the plight of political prisoners remain in limbo. Why is this unfairness of double standard and discrimination being done by President Aquino upon political prisoners? Must the President refuse to right the injustice inflicted to political prisoners and their families by the past Arroyo regime? As the principal beneficiary of the broad anti- Arroyo sentiment of the people which political prisoners helped form and for which they got arrested, tortured and detained, is it not incumbent upon the Aquino presidency to effect the immediate freedom of political prisoners?

As we approach the 25th anniversary of the 1986 EDSA 1 People Power uprising, we remember Ninoy as a political prisoner who staged hunger strikes to attain his freedom and resist Marcos’ tyranny, and Cory as having immediately and unconditionally released political prisoners upon assuming the presidency, must we remember Noynoy as the son with an unjustly different legacy?