Arrests of NDFP consultant Alan Jazmines and activist Ericson Acosta marred the opening of the peace process in Oslo. But both sides remain optimistic that despite these incidents, the negotiations would proceed smoothly.

By RAYMUND B. VILLANUEVA in Oslo and RONALYN V. OLEA in Manila
Bulatlat.com

OSLO, Norway — The National Democratic Front of the Philippines (NDFP) demands the release of Allan Jazminez who was arrested by Philippine authorities on the eve of the resumption of the formal peace negotiations being held in this Nordic capital.

In a press conference during the opening ceremonies of the ongoing talks, NDFP Negotiating Panel chairperson Luis Jalandoni confirmed that Jazmines is a “very valued” consultant to the NDFP.

“We are demanding that his release is carried out as soon as possible.  And such release would be of positive value toward the continuation of the peace negotiations,” Jalandoni said.

He added that Jazmines is a “document of identification” holder and should be released in accordance with the Joint Agreement on Safety and Immunity Guarantees (Jasig) signed by both the NDFP and Government of the Philippines (GPH) peace panels on February 24, 1995 in Nieuwegen, The Netherlands. 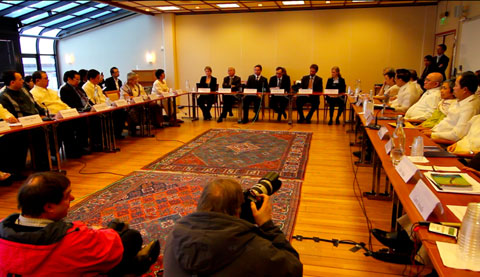 The peace panels during the opening ceremonies. (Photo by Martha Atienza)

“Well, I think when he was arrested there was no document at that time of the arrest that he was able to present.  Neither did he present a letter of acknowledgement from the government,” Padilla said.

In his rejoinder to Padilla’s reply, Jalandoni tried to explain to his lawyer counterpart the proper legal appreciation of Jasig possession.

“Even if he is not holding it at the moment he would still be in possession, legally, of it.  If he left it in his house, his residence, or with his family, that document of identification is still in his possession.  It is valid and it should be covered by the protection of the Jasig,” Jalandoni clarified.

Padilla promised to look into Jazmines’s case.  “We will try and verify if he is indeed part of the Jasig and when so done, when so accomplished, we will act accordingly,” he said. 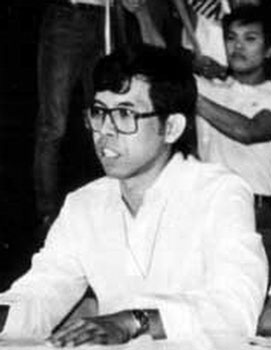 The NDFP demands the immediate release of Jazmines, a “very valued” consultant. This photo was taken during the founding congress of Partido ng Bayan in 1986.”

Alan Jazmines, 63, was arrested Feb. 14 at around 6:30 p.m. by combined elements of the local police and of the 56th Infantry Battalion of the Philippine Army (IBPA) in Subic village, in Baliuag, Bulacan while consulting local residents there on the issue of peace talks.

A day before, Ericson Acosta, 37, was arrested in the village of Bay-ang, San Jorge town in the province of Samar at 10 a.m., a report posted at the Philippine Information Agency said. The Armed Forces of the Philippine (AFP) claimed that Acosta is a ranking official of the CPP.

In a statement sent earlier through email, Jalandoni said Jazmines’s arrest was meant to disrupt the peace process.

“My arrest on the very eve of the NDFP-GPH peace talks by combined forces of the AFP and PNP [Philippine National Police] is an outright and arrogant mockery and sabotage of the peace process,” Jazmines said in a statement from prison.

Jazmines has been transferred to the PNP Custodial Center inside Camp Crame on Feb. 15. He was initially detained at Camp Gen. Alejo Santos in Malolos, Bulacan. Jazmines was told he is facing murder and rebellion charges in Quezon province.

Acosta, on the other hand, was charged with illegal possession of firearms and explosives and is now under the custody of the Gandara Municipal Police Office. 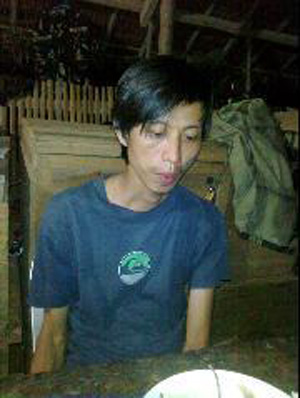 Acosta in a photo released to the media by the military. The arrest of Acosta, according to human-rights groups, is “an attempt by the military to sabotage the peace talks.”

In his statement, Jazmines said he told the arresting team that he is a consultant of the National Democratic Front of the Philippines (NDFP) and protected under the Joint Agreement on Safety and Immunity Guarantees (Jasig).

“Yet, the arresting officers said that after they relayed it to the top command of the AFP and PNP, their commanding officers ordered them to proceed with my arrest and detention saying ‘to hell with the Jasig.’” Jazmines said.

“The Government of the Republic of the Philippines’ fascist forces have been intentionally violating the Jasig with impunity and stubbornly refusing to release 14 other NDFP peace consultants and their staff who remain under detention, in order to prove that there is nothing to gain in the peace process, especially on the part of the revolutionary forces and the people,” Jazmines said.

“In adding another arrest of a Jasig-holder on the very eve of the resumption of the peace talks, the leadership of the fascist AFP and PNP want to show how easily they can violate all peace agreements and make it appear that the NDFP and the revolutionary forces are weak and have really nothing to leverage on and gain in the peace process. They want to use the peace process only to make the revolutionary forces capitulate,” he added. 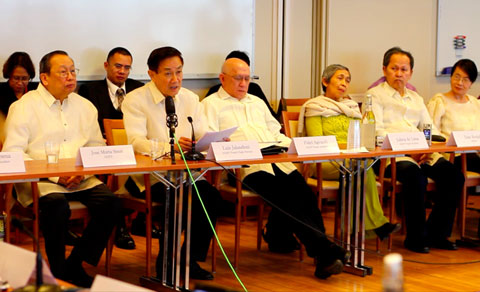 The NDFP peace panel insists Jazmines should be released. (Photo by Martha Atienza)

At the opening of the peace talks in Oslo, Jalandoni said they expect the expeditious release of all consultants including Jazmines, in accordance with the Jasig. “We expect the release of 350 political prisoners, with the operationalization of the CARHRIHL [Comprehensive Agreement on Respect for Human Rights and International Humanitarian Law].  They deserve to be released, just like the 400 military rebels, because they fought the abuses of the Arroyo regime,” Jalandoni said.