You Are Here: Home → 2011 → April → 5 → News in Pictures: Teacher-lawmaker Calls for Immediate Release of Hostages in Agusan del Sur 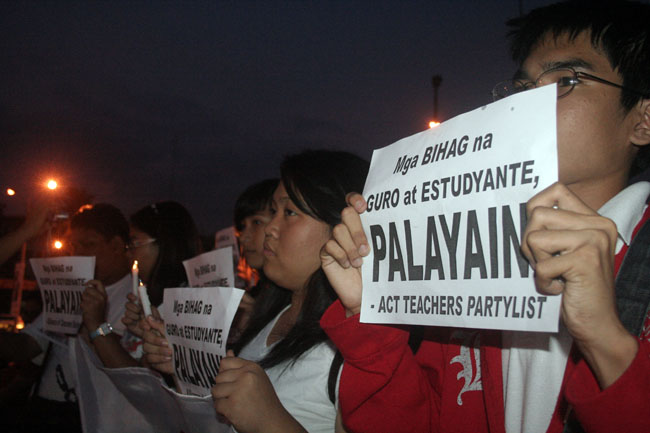 On April 1, at least six heavily armed men from the Manobo tribe took 16 people hostages, two of them officials of the Department of Education (DepEd) and demanded that the local police release their leader Ondo Perez. Perez, according to reports, was previously arrested and continues to be jail also for taking 79 hostages including 17 children in 2009 to protest government inaction on his clan’s ancestral land claim.

According to Chief Insp. Nelly Villagarcia of the Caraga regional police, the hostage-takers were led by Ondo’s brother Ilad Perez. They took the hostages at gunpoint after a graduation ceremony at a primary school in Barangay Purisima late in the afternoon. The gunmen were reported have taken the victims to a forested area. Afterwards they called local authorities including the police and laid down their demands.

In the immediate wake of the kidnapping, officials asked a local court to temporarily release Perez. Perez in the meantime is said to have already appealed to the hostage-takers to release the civilians.

Tinio, formerly a teacher at the University of the Philippines (UP), expressed strong condemnation of the kidnapping, saying that it was “a cowardly act committed against innocent students and dedicated public servants who strive to provide education to the young people of the remote communities in Prosperidad.”

He urged national authorities led by Department of the Interior and Local Governments Secretary Jesse Robredo together with the local authorities to secure the immediate release of all hostages. 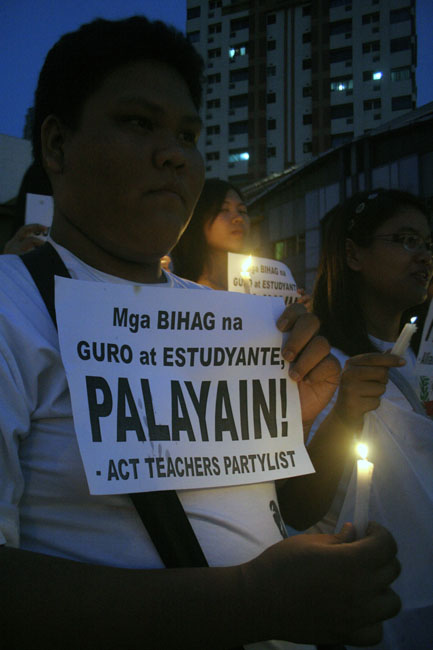 Tinio noted that teachers serving in remote areas are regularly targeted for kidnapping, particularly in Mindanao. He said that last year, teachers in Zamboanga, Zamboanga Sibugay, and Sulu were kidnapped by armed bandit groups. They were released only after months in captivity. The school principal kidnapped in Sulu was beheaded by his captors.

“All this highlights the vulnerability of school personnel serving in remote areas, mainly due to a lack of security which should be provided by the police and the local government authorities,” Tinio pointed out.

Tinio called for effective security measures to be immediately put in place to protect teachers and students. “The Philippine National Police must provide security to schools in remote areas by detailing police personnel to guard schools, putting up checkpoints and outposts at strategic locations, and so on. Local government authorities can also involve the community in providing security for their schools through the barangays and barangay tanods.”

“The factors which contribute to instability and lack of peace and order in these areas must also be addressed. For instance, the Aquino government must disarm all private armed groups and disband the militias or CAFGUs,” he said, noting that the Ondo Perez group responsible for the kidnapping in Prosperidad were composed of ex-CAFGUs armed and trained by the Armed Forces of the Philippines. 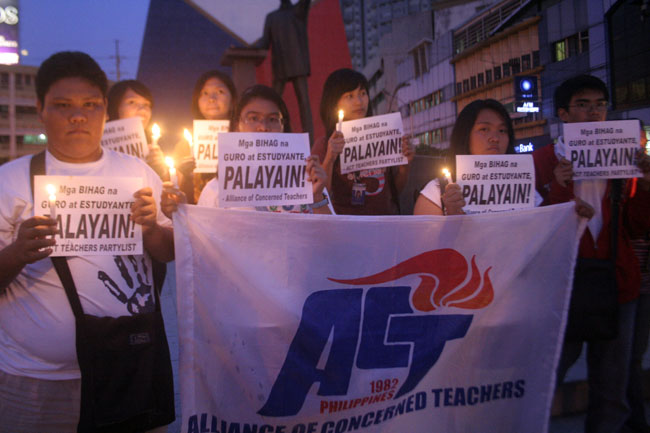 The lawmaker said there are persistent reports that there are many armed groups, private armies and criminal gangs that have the support of and enjoy protection from local politicians. He said that infamous Ampatuan massacre took place because the previous government under former president Gloria Macapagal-Arroyo tolerated the maintenance of a private army for private purposes for various.

“ It’s a matter of political will on the part of Aquino government to disarm and disband these groups,” he said.

Tinio said the government must also make sure that kidnappers are brought to justice and punished and that impunity does not prevail.

“Perpetrators of previous kidnappings of teachers remain at large. Given all this, the Aquino government must also go after the powerful political figures that are said to be behind these bandit groups and acting as their protectors,” he said.

Tinio vowed to call for a House investigation into the kidnappings of teachers and the lack of security provided to schools, school personnel, and students. “Hopefully, we can come up with measures that will prevent incidents like this from happening again.”

Education Secretary Armin Luistro has also condemned the kidnapping incident, saying that it was “ very disturbing that teachers who offer their lives for the community always fall victims to these crimes. “

“We appeal for the immediate and unconditional release of all the hostages,” he said.

Luistrto said that the DepEd is closely coordinating with Mayor Aldrin Magdamit of Prosperidad, head of the crisis committee, and Chief PNP Gen Raul Bacalzo to ensure that all the victims will be released unharmed. (Photos by Janess Ann J. Ellao /