To be idle and hungry

A jobless counts himself part of the vast army of dispossessed worldwide. He belongs to one in three workers globally either unemployed or living in poverty. In this country, his testimony appears to show unrealized promises made by President Benigno Aquino III to address unemployment.

DAVAO CITY, Philippines — “I find it hard to land a job because I don’t meet the employer’s qualifications,” lamented Cesar Balilahon.

He belongs to the growing army of idle and hungry workers — 40.2 million Filipinos who are in a state of “vulnerable employment.” The figures were part of the report released in January by the International Labor Organization’s Global Employment Trends 2012.

Balilahon’s complaint and the ILO report were further confirmed in the data presented by the National Statistics Office (NSO) this week. The NSO said that while the unemployment rate in 2011 was 0.3 points lower compared to the figure in 2010 at seven percent, the number of underemployed soared from 18.8 percent in 2010 to 19.3 percent last year.

The ILO said the country is plagued with a “large number of workers who are in poor quality and low-paid jobs, with intermittent and insecure work arrangements and poor working conditions.”

Balilahon counts himself part of the vast army of dispossessed worldwide. He belongs to one in three workers globally either unemployed or living in poverty. In the country, his testimony appears to show unrealized promises made by President Benigno Aquino III.

In his first state of the nation address (SONA), Aquino said foremost of his plans is employment generation. In October 2011, he initiated an economic stimulus package worth P72 billion (US$ 1.7 billion). In his second SONA, he said the moving targets of his government are those in the unemployed sector because there are fresh graduates every year who are looking for jobs. 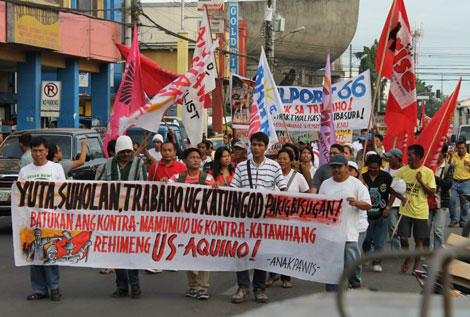 Workers in Davao City score the Aquino government for its anti-worker stance. They urge the president to provide decent jobs and wages; and to protect the workers’ basic rights.((davaotoday.com photo by
Ace R. Morandante)

These same graduates, however, were among the drastically hit with the jobs crisis. Globally, according to the ILO, some 74.8 million youth aged 15 to 24 went jobless last year, an increase of more than four million since 2007.

Lawyer Joffrey Suyao, director of the Department of Labor and Employment (DOLE)-Region 11 told davaotoday.com, “The Aquino government is bent on really addressing unemployment. There must be a mass creation of jobs. If there are more jobs for our people, what would follow is a reduction on poverty.”

But nearly two years later, not a few are still looking for decent jobs while many are jobless if not losing their jobs because of labor flexibilization schemes. Others are forced to resign because of low wages and no benefits.

Balilahon’s last work was in a Chinese-owned company called FTC, where he was hired as a marketing assistant and a visual artist. “But that didn’t happen in practice. Instead, I did clerical jobs. I also distributed flyers,” he said. Without health and social security benefits and full overtime pay, he continued to work, sometimes for 14 hours a day.

Lawyer Bienvenido Cariaga, ex-officio and chairman of the board of the Davao City Chamber of Commerce and Industry, said their members are “supposed to be” law-abiding citizens. “Businesses affiliated with DCCI follow labor standards like providing their employees with overtime pay, holiday pay and incentives, and remitting SSS and Philhealth deductions,” he said.

“If it will come to our attention that a company is facing a complaint, usually the Chamber disapproves its membership,” Cariaga said.

Meanwhile, Suyao of DOLE said their office follows the 22-point labor agenda while the Aquino government continues to implement its predecessor’s Philippine Medium Term Development Plan. “The program is further institutionalized through the Philippine Labor and Employment Plan (PLEP 2011-2016). Certain reforms are being implemented,” he added.

But for Romualdo Basilio, chairman of the labor group Kilusang Mayo Uno-Southern Mindanao, “What reforms, what plan is the government talking about?” He said, “The government has no concrete solution to provide job security for all workers. It continues to allow capitalists to practice labor flexibilization schemes or contractualization and casualization of workers to increase profits and reduce labor costs.”

The region has about 1.6 million contractual workers — or those who have no job security — out of the more than 1.8 million work force.

KMU reiterated its call for the Aquino government to “provide decent jobs and wages, to junk contractualization and to uphold the basic rights of the workers.”

For the 26-year old Balalihon, who had long quit his job, “We were the ones who slaved, but we have not gotten anything out of our sweat and labour. In contrast, our capitalist employers further enriched themselves.” (With reports from CJ Kuizon and Ace Morandante/davaotoday.com)