In Makati, the poor of Guatemala street know nothing of the city’s wealth

In Makati, the poor of Guatemala street know nothing of the city’s wealth “We have heard that the Makati City fathers want to make Makati a premier city; we wish that it would do so without driving out the poor like us. We are people, too, and we are willing to do our share if only the government would help us a little instead of mostly ignoring us.”

MANILA — Makati City is home to the Philippine Stock Exchange, Ayala Center, embassies, transnational banking corporations and various international lending agencies. Condominiums rise almost on a monthly basis, and to tourists, Makati is a city of opulence and luxury.

In one of the many urban poor communities hidden away in the city’s corners and boundaries, however, 300 families and residents of Guatemala St., San Isidro are fighting to save their homes.

Last June 7, the residents comprised mostly of itinerant vendors and tricycle drivers were given eviction notices by the Office of the City Engineer’s Office led by Engr. Nelson B. Morales. According to the notice, residents should have vacated the 800-square-meter-lot by the end of that same month as demolition operations were slated to begin July 16 to 27 to make way for the construction of a multi-million Brgy. San Isidro Community Complex. It was also said that the Makati local government was enforcing a “zero informal settler program.”

Immediately after the residents received the eviction notices, they held a community meeting. In the 1980s they had formed the Guatemala Neighborhood Organization (GNO), and it had remained alive through the years. On June 15, the GNO’s president Lino Ojos wrote and sent a letter to vice-president Jejomar Binay and to his son Makati mayor Jejomar Erwin S. Binay Jr., asking both officials to reconsider.

“We were not asking for special treatment; we just wanted to speak to Makati officials and plead our case. All of us in Guatemala are poor folk; most of us live from hand to mouth. Many of us are also too old to find better paying jobs or we lack the education. Mayor Binay should at least listen to us and hear about our situation. He can’t just drive us away from our homes: we’re voters of Makati,” Ojos said.

Weeks past, they have not received ay response from either official. Some community residents had heard of the Kalipunan ng Damayang Mahihirap (Kadamay) urban poor organization, and made the suggestion that they seek its help.

The Kadamay National Capital Region (NCR) immediately deployed community organizers to Guatemala and, along with student activists from Anakbayan-NCR, began to put together a plan of action to help the community defend itself against all threats of demolition. 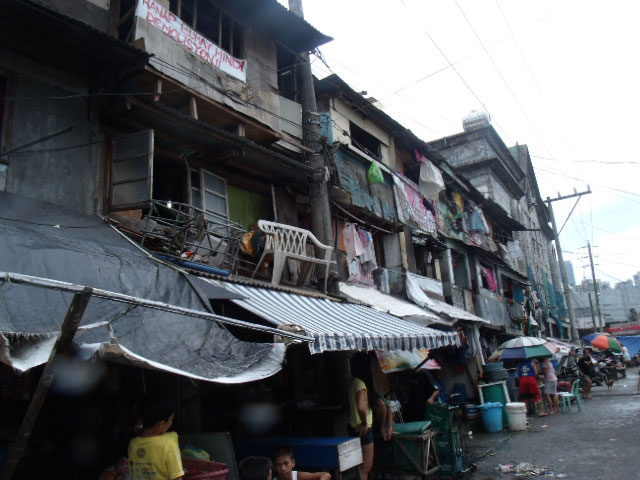 On July 20, the residents led by the GNO went to Vice-president Binay’s office at the Coconut Palace at the Cultural Center of the Philippines (CPP) complex. They sought an audience with the official so they could explain their side of the situation, but Binay refused to dialogue with them.

The following days July 23 and 25, the residents put together a “pre-demolition conference” at the San Isidro barangay hall and then at the Makati City Hall. The residents, through the GNO, presented a position paper on the threatened demolition and the supposed plans for Guatemala St., but officials of the Makati government refused pointblank to listen and instead insisted that the residents leave and allow themselves to be relocated to Calauan, Laguna province where the Makati local government had already pushed other urban poor settlers to move.

Since then, the residents have been on 24-7 standby, ever watchful against any attempts of the Makati City Hall to destroy their homes.

‘We have lived here all our lives’

Luz Cabos, 54, has lived in Guatemala St. since 1973. She and her husband have raised their family of seven children in one of the three-storey tall, ramshackle shanties there. Originally from Eastern Samar, Luz has long considered Guatemala St. her home. To make ends meet, she prepares and cooks boiled corn which her husband then sells to employees at the Professional Regulation Commission (PRC) near Pasong Tamo, also in Makati. They also sell sliced pineapple.

“We have nowhere else to go. All my children have been born and raised here. We make a living here, our children go to the nearby schools, and we attend mass at the Brgy. San Isidro church. We are poor, yes; but we are not criminals and we try to live with dignity as much as we can,” she said.

Her eyes began to well with tears as she narrated how she felt when the demolition notices came last June. “It was a shock to me. My children are barely grown: only one is in college, two are in high school and one is attending elementary school. The rest we cannot afford to send to school yet. I know how much rent costs; we would be very, very lucky if we could find a room for P5,000 or P7,000 ($119 to $166), but even if we somehow found the money, we won’t be able to cram all of us inside one room,” she said. 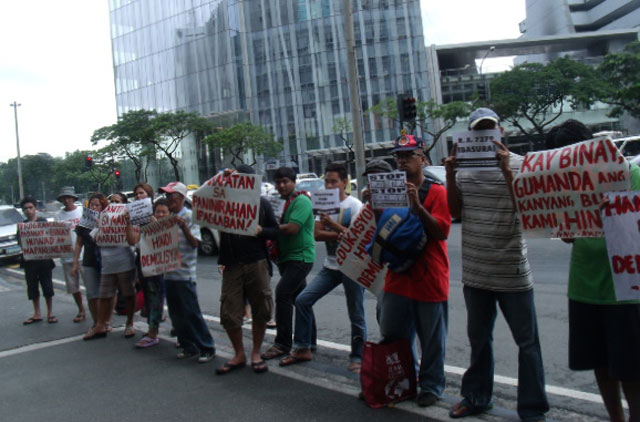 Residents of Guatemala street stage a rally against the impending demolition in front of the Makati City Hall.(Photo by Ina Alleco R. Silverio / bulatlat.com)

Nanay Luz said that she and a number of her neighbors already went with San Isidro baranggay officials to Calauan to see the relocation site the local government was talking about.

She was severely disappointed.

“There was nothing there but soil and grass! There weren’t any houses there. The officials then told us that it would be up to us to build houses or shelters, but they would help us transport materials. They said that in the meantime, we would be allowed to live like evacuees in the nearby schools. It was so hurtful to us, so insulting to realize that we were actually being discarded like garbage, like we weren’t people at all, ” she said almost weeping.

It turned out that the Makati City government’s so-called “relocation program” consisted of transporting residents of demolished urban poor communities, transporting the shelter materials from the destroyed houses such as the iron roofs, cardboard or plywood walls and flooring, and then dumping all of them in a far-flung relocation site. “The site was far from civilization — no market or schools close by. The relocatees who lived there said that there was no electricity or on-site potable water and they had to buy drinking water. Many of them had been there for the last six years. The wives and the children stayed at home while the husbands continued to work in Makati where they are employed as vendors like the rest of us. The husbands come home once every two weeks because bus fare is too dear,” Nanay Luz explained.

According to Kadamay NCR, there are already more than 900 families in the Calauan, Laguna relocation site.

While Republic Act 7279 or the Urban Development and Housing Act of 1992 allows the eviction or demolition of houses occupying danger areas such as esteros, railroad tracks and waterways, the law also states that resettlement areas that take into consideration “the degree of availability of basic services and facilities, their accessibility and proximity to job sites and other economic opportunities” should be identified for displaced citizens.