MANILA – A coalition of advocates for reproductive health (RH) called on voters to support pro-RH local and national candidates and to shun those against it.

Rom Dongeto, executive director of the Philippine Legislators’ Committee on Population and Development Foundation, Inc. (PLCPD), said Filipinos should protect and defend the gains of the Reproductive Health Law or Republic Act 10354.

Dongeto expressed outrage over the status quo order of the Supreme Court suspending the RH Law for 120 days. He said it is apparent that those against the law would do everything to block its implementation.

Dr. Esperanza Cabral, lead convener of the Purple Vote campaign, said the 12 senators, district and sectoral representatives and local officials who will be elected will play a crucial role in the success of the implementation of the RH Law.

Reading the Purple Vote statement, Cabral urged every voter to choose candidates who believe in and who will stand by what the RH Law means, who will make sure of its purposeful and meaningful implementation, who will make sure that programs and services on RH will be funded by the government as the law provides; and, who will not put the interest of a few before the good of the people. 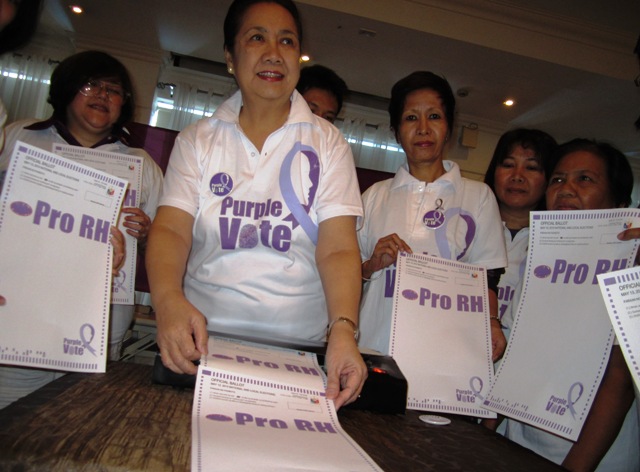 “On May 13, let us use our Purple Vote to guard our freedom and the rights and future of our women, children and families,” Cabral said during the launch, May 20.

Dr. Junice Melgar of Likhaan Center for Women’s Health said the coalition hopes to come up with a list of candidates that they deem deserving.

Melgar added that they would also support legislators who are under attack due to their support for the RH law.

Elizabeth Angsioco of Democratic Socialist Women of the Philippines said they will also release a list of anti-RH candidates and they will campaign against them.

Red Tani of the Filipino Free Thinkers clarified that the position on RH Law would just be one of the considerations for endorsement of the coalition. Tani said they have other criteria, such as the candidates’ stance on Freedom of Information bill, sin tax law, among others.

“Purple Vote is about human rights of all, regardless of religion,” Tani said. “The Philippines is a secular country, not a province of Vatican,” he added, referring to the Catholic hierarchy’s aggressive campaign against RH.

The Catholic Church, particularly the Diocese of Bacolod, has branded candidates who are pro-RH as “Team Patay” (Death) and anti-RH as “Team Buhay” (Life).

“There is no such thing as Catholic vote on RH,” Dr. Sylvia Estrada-Claudio, director of the University of the Philippines Center for Women’s Studies, said.

PLCPD’s Dongeto, meanwhile, said that the Catholic Church’s name-calling is not at all new. “They did the same negative campaign in 2007,” he said. “They call RH advocates as ‘anti-women,’ ‘anti-life,’ ‘baby killers.’

Addressing the voters, Cabral said: “Let’s consider the future of the nation.”