By JANUARY A. TURLA
Northern Dispatch

BAGUIO CITY — Members of Youth for Change Movement (YCM) joined the rest of the world and took part in celebrating the 43rd Earth Day at People’s Park, April 22.

The theme for this year’s Earth Day is “The Face of Climate Change.”

Lester Edpis, also of YCM, said Earth Day is highly connected to Cordillera Day which is celebrated every April 24. He said Macliing Dulag, a Cordillera hero, is a protector of environment himself as he fought for the preservation of ancestral lands in Kalinga and Bontoc during martial law.

Dulag was a Kalinga pangat (leader) who was killed by soldiers of the 4th Infantry Division of the Philippine Army because of his staunch opposition to the Chico dam project. The Chico dam project of the Marcos regime was strongly opposed by indigenous peoples (IP) of Kalinga and Mountain Province at the time because of adverse effect to the environment and displacement of indigenous peoples communities. 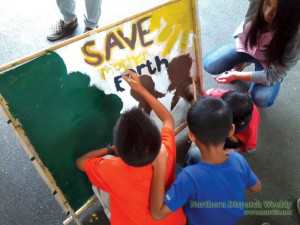 Little hands paint their advocacy to save the Earth and make a difference. (Photo by Carmela Balcita / nordis.net)

Katribu highly believes in environmental preservation and this served as their battle cry for the celebration. The partylist also said that industrialized countries are responsible for the immense pollution and presented corporate mining as a definite instance of environmental destruction.