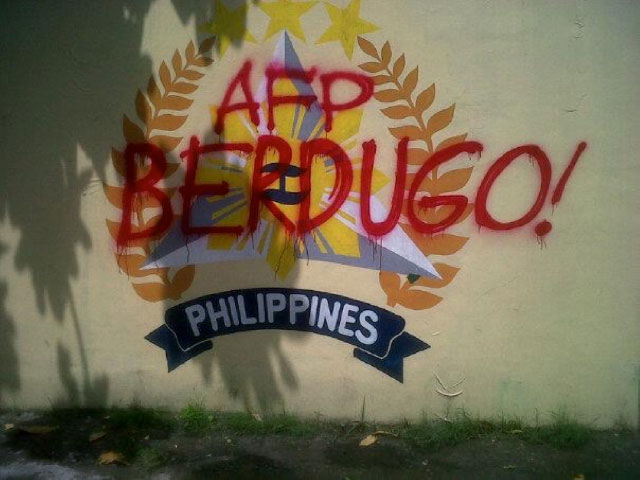 Berdugo is derived from the Spanish verdugo, which means 1. executioner or a person who carries out the death penalty; 2. hangman in the gallows; 3. tormentor or a cruel person.

“There is no reputation to besmirch” was Karapatan Secretary General Cristina Palabay’s curt response to the Armed Forces of the Philippines’ (AFP) allegation that her organizations and affiliates have been “besmiriching” AFP’s “reputation even in the international community.” In a recent statement released by Karapatan, a national alliance of human rights organisations, Palabay further explains the logical reason for the AFP’s charge:

“The AFP is obviously irked by the complaints filed by Karapatan before the United Nations Human Rights Council on the killing of two Lumad leaders, Dionel Campos and Juvello Sinzo, and Lumad school Director Emerito Samarca…The killing resulted in the evacuation of 3,000 Lumad coming from the affected communities in Surigao del Sur.”
Palabay saw it fit to expose the preposterous findings of the AFP investigation as merely a way to “exonerate itself from the killings.” Such a quickie and incredible AFP investigation uses the trite yet tested formula of aggressors, in this case, it goes as far as depicting the victims as perpetrators of the crimes committed against them by concluding that the killings were a result of Lumad tribal wars.

Let it be known that all 15 to 18 tribes that compose the Lumad have suffered from the nefarious attempts at and actual occupation of their ancestral land by logging and mining corporations. For a long time now, the Lumad have been oppressed. Yet like all oppressed peoples, they have also been one of freedom’s greatest champions. They have built schools that cultivate a philosophy of “comperehensive education.” Slain Alcadev executive director Emerito Samarca, in an interview, explains how the theory and practice of comprehensive education is based on indigenous life-making and rooted in the most noble and humane hopes of the Lumad for their children and the nation’s future.

Just a few days after the extra-judicial killing of Samarca, Campos and Sinzo, the walls of Camp Crame fronting EDSA were painted with a visually disruptive and provocative text that reads “AFP Berdugo!” The militant youth organization Anakbayan (children of the people) owns up to this act of subversive vandalism by pitting its organizational name against a fascist institution. The sight of it all was symbolic, to say the very least. Imagine a bunch of young people, unarmed yet daring, provoking an institution that has been identified by the Lumad as perpetrators of violent repression in their land.

Were the militant youth doing it in memory of all the people’s martyrs? Did they ever consider AFP breaking up their group and sending them to jail? What if the fascists made them disappear into the distance, never to be seen again, just like Karen Empeno and Sherlyn Cadapan? One thing is for sure, these young activists of Anakbayan refused to rest and “go gently into the night.”

“Is it fucking right?”
-Eminem, Guts Over Fear

Whenever grievances are mounting and people unite to struggle for democracy, the military apparatus across continents functions to break up the solidarity of the people by all means. Historically, military institutions inflict the most horrible blows upon the workers, peasants, and student movements, indigenous peoples, and progressive religious groups. These are sectors that would historically compose the continental character of national liberation struggles in countries where the local elite and the imperialist aggressor merge together and implement a nihilistic program against the people.

Documents of state-sponsored barbarism in the Philippines, Cuba, Algeria, Vietnam, Angola, Guatemala, Argentina, to name a few countries that had waged or continue to wage a difficult struggle for genuine democracy, are also testaments to the appeal of authoritarian ideology among the imperialist-loving oligarchs and the military and police establishments that defend their interests at all costs. Their brutalities are unspeakable.

But, too, in all those instances across the world, many people would bravely stand up and speak of love, solidarity, and a better future awaiting a swelling mass of protesters. And they, too, in many instances would be killed by government soldiers in the name of the motherland.

If there is anyone out there who is enraged and scandalized by the just defense of the political, economic, and social interests of the Lumad with a claim to truth that rings nationwide—“AFP Berdugo!”— then please know that all wars of national liberation worldwide have brought forth two opposing conceptualizations of history owing to the confrontation of the forces of social transformation (a way forward) and reaction (a way backward onto the perils of death).

“Honesty is such a lonely word”
-Billy Joel

A person who exonerates the military establishment by saying that not all state soldiers are mercenary killers of the people and therefore the claims “AFP, Berdugo” is a “false generalization” will be better off acquiring an understanding of social institutions before defending one that is currently engaged in the worst forms of brutality against the Lumad and other basic sectors. For even if say 2 up to 50 good military men can come together and move to change the name of the AFP to something else to save themselves from institutional criticism and condemnation, these few good men would have been a breakaway group that can only affirm Anakbayan’s charge.

In short, absurdities cannot, in any way, contribute to the much needed unity that we must forge to defend human rights.

A person who thinks that the AFP is flawless and perfect despite what is going on all over the country (and I am not even zeroing in on scandalous corruption cases inside the military and police institutions) might do better in denouncing the long list of inalienable human rights that are supposed to be enjoyed by everyone.

Some pundits and “peace advocates” claim that various forces in society have rendered the Lumad prey to the military and its para-military groups. They claim that communist insurgents like the New People’s Army are being used by the military as justification for its occupation of Lumad land and killings of the Lumad. Hence, the Lumad have no one to blame but themselves for supporting the communist cause. These so-called peace advocates, environmentalists and political analysts mention the mining business in terms that are so vague that this factor is reduced to some hazy context. They discursively align their analyses with that of the AFP whose primary defense for occupying Lumad territory is to crush communist insurgency.

So, as it were, there are four groups involved in this shattering violation of human rights. Big mining corporations (foreign capital), the AFP and the communist insurgents/NPA, and the Lumad. The first three are responsible for the Lumad killings, although big business is made to appear like some silent partner in this mass murder.

This account further paints the Lumad as passive witnesses of history as this narrative suggests that the Lumad can only allow the NPA and/or AFP to occupy their ancestral land and determine their future. But anyone who has been following the news will get an impression of how the para-military killings are just the consequence of communist “intrusion” in Lumad land. This is actually an orientalist picture of what is being portrayed as a very exotic mix of 15 to 18 ethno-linguistic groups whose culture, politics, belief system are so exotic and unique, they can’t be part of any historical confrontation that involves state institutions and its avowed enemies. They can only be victims or pawns of “mainstream” and “modern” conflicts between “non-indigenous” groups.

This line of argument that equates the military with the communist insurgents obfuscates the difference between empire and insurgency. This denial amounts to an even more absurd denial of the confrontation between these two opposing forces (mining business and the NPA) for which military institutions have historically been used to defend the interest of the former in many neo-colonies and/or client states worldwide. Why deny this when the AFP and its paramilitary are honest enough to denounce their communist counterpart in defense of a state that is entangled with the interest of big business?

As the people of Alcadev were being herded into the abyss that fateful day of September 1, the AFP’s paramilitary forces ordered Datu Juvello Sinzo to make a promise. The voice of God demanded that Sinzo stops the Lumad from supporting the New People’s Army (NPA). He could have just said “Sir, yes, Sir!” But perhaps Datu refused to lie about his capacity.

One of Alcadev’s teacher, Gary Payac recounts* how Datu repeatedly denied his murderers’ allegation that Alcadev is an NPA school. But when he was forced commit his people’s desires to the forces of repression, he simply spoke the truth about his capacity. “Hindi ko maipapangako na hindi sila susuporta. Hindi ko hawak ang kanilang mga damdamin” [I cannot promise that they will not support (the NPA). I do not have control over their [the Lumad’s] desires). And his brain splattered all over, causing the herd to turn into a scattered flock that ran afloat the air.

Datu’s last words neither confirm nor deny the AFP’s allegation about the Lumad’s ties with communist insurgents. But it does confirm his nuanced and historical view of politics. Yet there are a few people who claim expertise on the Lumad, same people who tell everyone to leave the Lumad alone yet in the same breath claim I am Lumad, and demand that we all should own up to being Lumad. These confusing streak of claims clearly homogenizes the Lumad and harmonizes their stakes in politics with one’s own.

Faced with contradictory statements that blur an expert’s actual position in the class struggle, one must remember Datu Jovello Sinzo, he who did not choke back when a correct argument reached his lips. After all, and as all military operations/massacres carried out for state-sponsored big business go worldwide, no matter what a target like Datu Jovello Sinzo says, the military’s para-military would have killed him just the same.

Berdugo is derived from the Spanish verdugo, which means 1. executioner or a person who carries out the death penalty; 2. hangman in the gallows; 3. tormentor or a cruel person. AFP, berdugo.

*Documentation of his testimony in “#StopLumadKillings: Bloggers, netizens and students meet up with Lumads” held on September 9, 4-6PM at the University Student Council Office, Vinzons Hall, UP-Diliman
Photo from Karapatan website.

Sarah Raymundo is a full-time faculty at the University of the Philippines-Center for International Studies (UP-CIS Diliman) and a member of the National Executive Board of the All U.P. Academic Employees Union. She is the current National Treasurer of the Alliance of Concerned Teachers (ACT) and the External Vice Chair of the Philppine Anti-Impeiralist Studies (PAIS). She is also a member of the Editorial Board of Interface: A Journal for Social Movements.