You Are Here: Home → 2016 → April → 4 → Issues, policies that national candidates would not touch

Issues, policies that national candidates would not touch 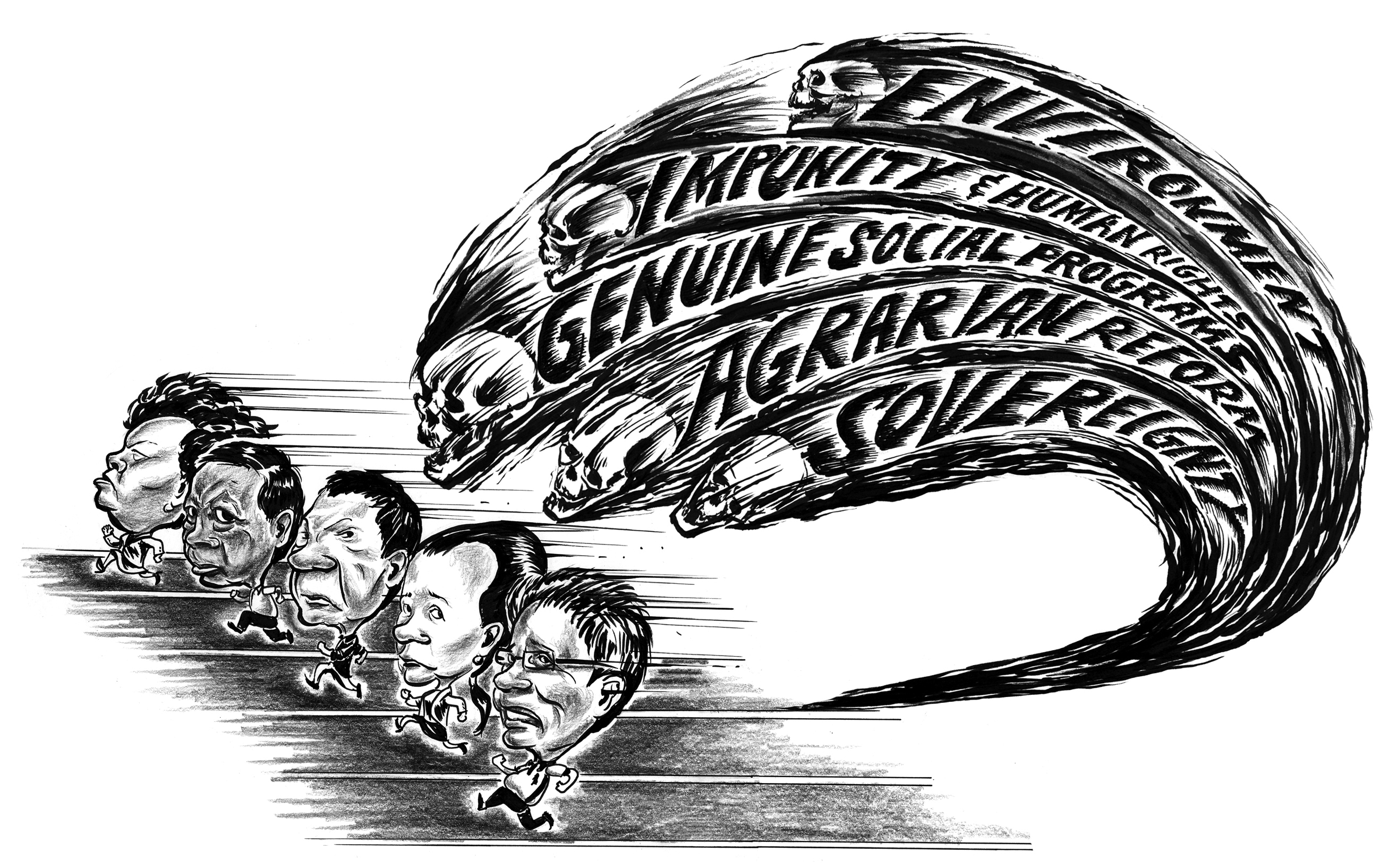 Voters have witnessed two presidential debates already: the first at Capitol University in Cagayan de Oro City and a second one at the University of the Philippines–Cebu. Have these clarified the platforms of the presidential candidates? Did these debates clarify their positions on the major issues and problems confronting the Filipino people? Have these debates sharply delineated their differences in platforms and positions?

Sadly, if one would take the personal attacks aside, there are no sharp differences in what the presidential candidates have been declaring as their platforms and would be policies. President Aquino was right in saying that there is no “genuine or authentic” opposition if one is to look at the programs and policies of the different candidates for president. All candidates appear intent on merely continuing the programs and policies being implemented by the Aquino administration. But President Aquino could not claim that these were new to his administration and therefore, could be defined within his “daang matuwid” program. These policies and programs are merely a continuation of the neoliberal policies and programs that were pursued by the past administrations since the 1980s.

As for the banner issues being put forward by the candidates:

Eliminate crime and corruption? All of them have been promising that. Generate jobs, fast track infrastructure projects, especially those under the Public Private Partnership project? Everybody has been saying that. Remove the remaining restrictions on foreign investments, especially through amending the economic provisions in the 1987 Constitution? Continue the Conditional Cash Transfer (CCT) or Pantawid Pamilyang Pilipino Program (4Ps)? No candidate has contested that.

But there are fundamental issues that the candidates for president would rather not touch such as:

1. Sovereignty – There are two issues on sovereignty: political and economic. On political sovereignty, except for Miriam Defensor-Santiago, no other candidate has expressed a position against the enhanced and continuing presence of US troops and war materiel in the country and has committed to work for the abrogation of the Enhanced Defense Cooperation Agreement, the Visiting Forces Agreement, and the Mutual Defense Treaty. This may be due to their belief that the country’s security depends a lot on the US, especially with the current territorial dispute against China. These candidates do not believe that the country could strengthen itself on its own and rely on its citizens to defend the country and its sovereignty. And of course, they are afraid to provoke the ire of the US, who could make life difficult for a candidate or target him or her for “regime change” in the future.

On economic sovereignty, no candidate has declared an intention to reverse the liberalization, deregulation, and privatization policies that have been a burden to the Filipino people through higher prices of basic goods and commodities and more expensive rates of basic utilities and services. Instead, all have even promised to intensify these policies through amending the 1987 Constitution. No candidate has declared that his or her administration would pursue policies related to and invest in developing local industries to provide for the needs of the people and the economy and generate local jobs.

It appears that all the candidates subscribe to the belief that the country’s development and job generation program are hinged on foreign investments.

2. Agrarian reform – No candidate has, so far, declared his or her platform for agrarian reform, including government investments to support farmers and the development of rural industries for processing of agricultural produce to supply the food and other needs of the people and raw materials for local industry.

Perhaps, this is due to the fact that majority of politicians at the local level, especially in the provinces, are either landlords or have the support of big landlords. Likewise, among the biggest supporters of national candidates, in terms of financing and vote getting, are owners of vast landholdings, which include corporations and political warlords.

3. Pursuit of comprehensive, substantial, and effective programs and projects to protect the environment and investment in measures for climate change mitigation and adaptation. – This would also entail the reversal of laws, policies, programs and projects that destroy the environment such as large-scale, extractive mining for export, dirty sources of energy such as coal-fired power plants, dependence on imported oil and gas, commercial logging, heavy use of chemical fertilizers and pesticides especially by large agro-industrial corporations, among others. This should also translate into stricter environmental regulations for corporations and government investments in clean energy.

All candidates, and even the Aquino government, declare their adherence to environmental protection and the need for climate change mitigation and adaptation and may even mention token measures. But large-scale, extractive mining, power generation, agro-industrial corporations, the oil industry are either heavily financed by or are destinations of foreign investments. Isn’t the fact that the heavy emitters of greenhouse gases are either the mother countries of Multinational Corporations MNCs), such as the US, or the countries where their production processes are located, such as China and India, instructive of their regard for the environment?

4. Addressing impunity and pursuing justice for human rights violations – A recent trt.com report revealed that Colombian prosecutors will charge two Army generals Gen. Henry Torres, the first active duty general to be detained, and former Army commander Gen. Mario Montoya, a highly decorated retired general, with homicide for the killing of thousands of civilians from 2002 to 2008.

In 2012, a December 29, 2012 Interaksyon.com report revealed that Chile indicted eight former army officers for the killing of activist singer Victor Jara days after general Augusto Pinochet grabbed power through a coup d’état in 1973. General Augusto Pinochet himself was arrested in 1998 for the torture and killings of thousands during his bloody coup.

This never happened in the Philippines. The late president Ferdinand E. Marcos was convicted for human rights violations in a class action suit filed not by the government but by the victims of human rights violations before the Federal District Court of Hawaii. Former president Gloria Macapagal-Arroyo was never pursued for the spate of extrajudicial killings under her administration. Arroyo’s main henchman and poster boy of his Oplan Bantay Laya former Army general Jovito Palparan was arrested for kidnapping and murder in a case filed not by the government but by the mothers of missing UP activists Sherlyn Cadapan and Karen Empeño.

President Aquino never pursued justice and neither did he address the impunity in human rights violations because the same things happened under his watch. The continuing attacks on the Lumad and their schools have penetrated the nation’s consciousness and almost everybody hears their cries for justice, except President Aquino.

All of the candidates for president have remained silent on the issue of impunity, justice, extrajudicial killings and murders of journalists, which betrays either their fear of the military or their intention to do the same. Of course, there could be no genuine promotion and protection of human rights if impunity reigns and justice remains elusive.

Sen. Grace Poe and her candidate for vice president Chiz Escudero have batted for free education up to the tertiary level. Vice President Jejomar Binay promised to enhance public education and Makati city, from the time he was Mayor, has been known to provide free health services to the poor and the elderly. Almost all, with the exception of Aquino’s candidate Mar Roxas, supports the bill to increase the pension of Social Security System (SSS) members.

Candidates for president have not, so far, outlined their comprehensive program for social services. All declared their intention to continue with the CCT or 4Ps dole out program of the Aquino administration and that of his predecessor Gloria Macapagal-Arroyo. The CCT is being promoted by the IMF-WB as the only social safety net consistent with the neoliberal program.

If the candidates for president, and vice president for that matter, remain silent on these issues, then it is up to the people to raise these with them through various means, such as bombarding them with letters, emails, and tweets, among others. But our efforts should not end with the elections. It should continue even after the next president has been declared. The Filipino people should push for their rights, interests, and welfare while being vigilant about the policies, laws and programs that would be implemented by the next administration, especially those that would be detrimental to their rights and welfare.