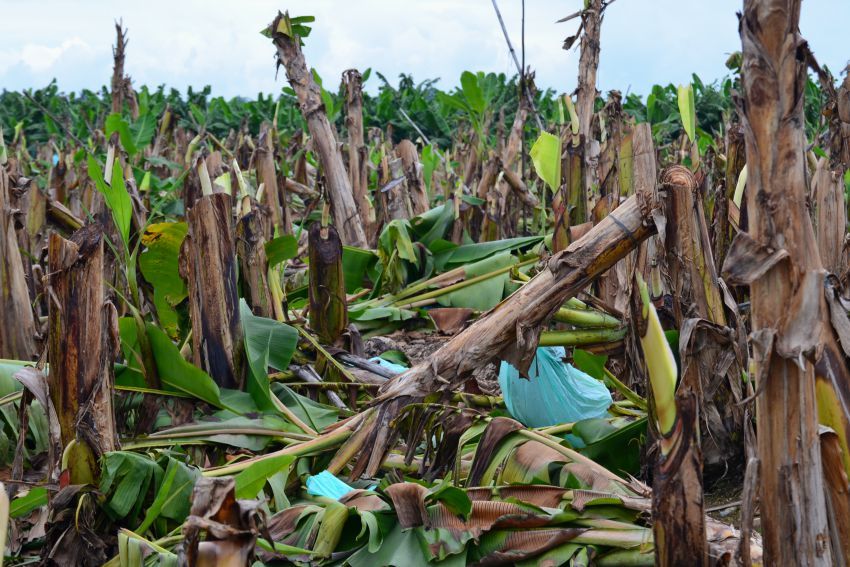 “That is the reason why we cut the bananas, but if they [guards] will still enter even when there are no more bananas, then they are after the land.”

Atty. Leilani Espejo, legal counsel for Lapanday, said based on the reports they received as of Thursday night, Dec. 15, the agrarian reform beneficiaries have cut down at least 15 hectares of standing banana crops in the 145-hectare of land occupied by members of the Madaum Agrarian Reform Beneficiaries Association, Inc.

In a press conference on Friday morning at the Apo View Hotel here, Espejo said the chopping down of the banana crops is illegal because Marbai does not own it and the lands where the crops are planted is subject to an agreement between Lapanday and the Hijo Employees Association Reform Beneficiaries Cooperative-1. 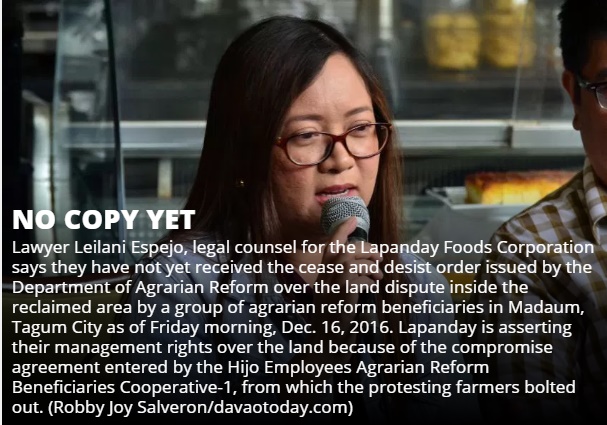 “We have a compromise agreement with the cooperative which allows us to manage the (San Isidro) Sanid area consisting of around 145 hectares and for Lapanday to exclusively buy all the produce of the land,” Espejo said.

“So they cannot chop the bananas. How can we manage the area? How can we buy these fruits if they already chopped?” (sic) Espejo said.

Lapanday said the compromise agreement was signed between HEARBCO-1 and LFC on September 9, 2011.

According to the compromise agreement, the Hearbco-1’s accounts with the LFC for “loans, cash advances, materials, and farm inputs, amount to P226,213,818.82, exclusive of opportunity loses (sic), freight losses, and other costs incurred due to the breach of contract.”

It also added that “the actual damages for litigation, security and other costs which LFC suffered exclusive of opportunity loses (sic) and freight loses amount to P20 million” bringing the total amount of the outstanding advances for loans, cash advances, materials, and farm inputs which Hearbco-1 needs to pay LFC as of July 17, 2011 is P246,213,818.82.”

Manolito Dagatan, chief finance officer of Lapanday, said the chopped area is 10 percent of the 150-hectares of the Sanid area occupied by the Marbai.

He said the total land area comprised three percent of the volume of Lapanday.

Around 159 agrarian reform beneficiaries under the Marbai, who broke away from Hearbco-1, reclaimed the San Isidro farm on Friday, Dec.9 after they were ousted from the land six years ago.

Artemio Serot, chairman of the the Agrarian Reform Beneficiaries-1 alliance, said they formed Marbai because they wanted to organize farmers and cut ties with Lapanday whom they accuse of exploitation through the onerous contract.

On Monday, seven protesters were injured after armed men, believed to be members of the Lapanday security guards fired at them.

On Tuesday, the farmers started cutting banana crops, saying that Lapanday harvesters were harvesting the remaining fruits and when Marbai try to stop them, security personnel of the LFC attacks them.

“That is the reason why we cut the bananas, but if they [guards] will still enter even when there are no more bananas, then they are after the land,” Tuyak added. 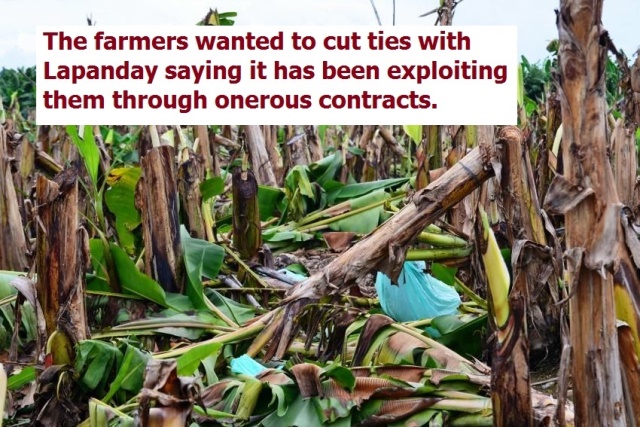 On Wednesday, two more protesters were hurt in the latest attack.

The Department of Agrarian Reform on Thursday issued a cease and desist order prohibiting Lapanday and its security guards from forcibly evicting the farmers under Marbai from the banana plantation.

On Wednesday, Tagum City Mayor Allan Rellob convened the city’s crisis management committee which met with the Hearbco-1 representatives and Lapanday. During the meeting, Rellon ordered a status quo on the part of the Lapanday guards and for the Philippine National Police to secure the area.

A dialogue between the parties is scheduled for Monday, Dec. 19 inside the Sanid area occupied by the farmers. Reposted by