When Rodrigo Duterte became president in mid-2016, many were confident that he would bring about genuine change in the country. Included in these hopefuls are the science and technology community, positive that his administration would cease the passive path on tackling scientific development treaded on by previous presidents, and instead undergo a track that will lead to dynamic scientific and technological advancement.

Together with the alliance Scientists for Change, AGHAM Advocates of Science and Technology for the People posed demands to President Duterte at the start of his term to develop the country’s science and technology sector as an essential element for national development and progress. 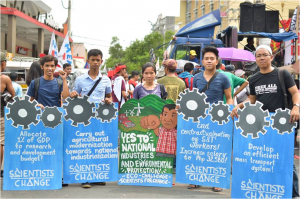 The president’s positive pronouncements sparked optimism among the ranks of the science and technology sector. One of which is his declaration of support for the revival of the steel industry, recognizing it as an essential ingredient in industrialization. The P1.1B budget for the household electrification in off-grid areas was also a speck of light for the communities in remote areas.

Another promise that a lot of people are looking forward to is his call to end contractualization which also affects science and technology workers. He also announced an increase in the budget for research and development that focuses on critical areas of study such as climate change, renewable energy, and food, and passed critical guidelines on the influx of GMO products.

Another move that earned a thumbs up is his administration’s engagement in the peace talks with the CPP-NPA-NDF which is paving a way for steps in addressing the root cause of the half-a-century civil war waged by the revolutionaries. This also opened the discourse on national industrialization under the Comprehensive Agreement on Social and Economic Reforms. It’s a dash of hope for a just and lasting peace that the people has long been wanting.

However, if we are talking about real “change”, there are still a lot of work to do: promises to be fulfilled and pronouncements that need concrete actions.

The basic in everything, such as building a house or constructing a bridge, is missing — the blueprint. Scientists are expecting the Duterte government to craft a comprehensive plan on science and technology geared towards the development of national industries for domestic needs early in his term to ensure that policies would tread a definite path to progress.

In each passing day, we are witness to the changing temperament of the Duterte administration. The president is revealing more and more of his growing preference for anti-people and pro-big business policies.

Privatization of strategic industries is in business as usual. The 982-MW Angus-Pulangi hydropower complex, the biggest power source in Mindanao and one of the few remaining government assets, is still up for bid to private corporations this 2017. Onerous contract deals under Public-Private Partnerships such as the LRMC-government deal on LRT will push through. Even the risk-laden Laguna Lakeshore Expressway Dike Project, the bidding of which failed early last year due to lack of bidders, will press on despite the fact that it has been labelled too ambitious and implausible. 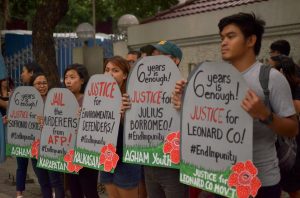 “No endo” still seems to be a lip service since millions of workers still lack security of tenure, including those from the S&T sector. Regarding human rights, justice is still elusive for slain and vilified scientists such as Leonard Co, Adele Salvador and Kim Gargar. Their cases appear to be shelved as no perpetrators are put in jail.

The widespread public sentiment against Duterte culminated when he gave a nod to the burial of Ferdinand Marcos at the Libingan ng mga Bayani, inciting fear of the possibility of a Marcos rehabilitation. This has been conjoined with the revival of ghosts of Martial law such as the Bataan Nuclear Power Plant, which geologists called “a sleeping disaster” after finding out that, aside from its obsolete and hazardous technology, it sits atop the active Lubao fault and on the slopes of a capable volcano.

After the 6-month adjustment phase, this 2017 will be witness to many issues which will serve as litmus tests for the people to see and judge whether or not he will truly bring about the change that he promised in his campaign and during his first months in office.

If he would listen to the people, he would realize that privatization of natural resources and strategic industries have been proven to disadvantage the public, especially the marginalized; that sufficient support should be provided to our science and technology workers to make them stay and serve the country; that a comprehensive blueprint on science and technology should be crafted immediately towards national industrialization and economic growth. 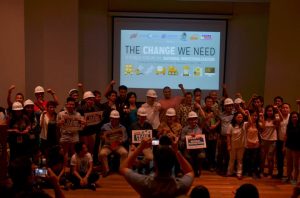 On the other hand, we as a people should not be too complacent. We must not entrust our fate to a single figure of power. The change we need is in our hands. Scientists, along with other sectors, should be assertive in defending people’s rights and working for genuine national development and progress.#