A climate villain all along

US President Donald Trump summed up the logic of the US Government’s recent withdrawal from the Paris Agreement on Climate Change with this statement: “The Paris Accord is very unfair at the highest level to the United States.”

This moment was a long time coming. Before becoming the president of the United States of America, Donald Trump was a known climate change and global warming skeptic. He believed that climate change science is a hoax and has even claimed it is a Chinese conspiracy to undermine the US.

Upon his triumph in the White House, President Trump immediately proposed to significantly cut the budget of the US Environmental Protection Agency (EPA) and other government scientific research institutions, while at the same time easing environmental restrictions on the energy industry and other corporations in emitting pollutants.

The US pull-out from the Paris Agreement is a big blow to the international community in its collective aspiration to tackle climate change. This means the international community cannot hold accountable the runaway emissions of the US, the number one historical global greenhouse gas (GHG) polluter and currently second biggest global GHG emitter of pollutants, next only to China. In 2015, the United States accounted for 14 percent of the world’s carbon emissions.

With this move, the Trump administration unilaterally rescinds its commitment to reduce its carbon emission by 26-28 percent by 2025, which was committed by the previous Obama administration. The US would also withdraw its financial support to the UN Green Climate Fund.

You will surmise that the Paris Pull-out is a crazy and stupid decision for the US that will isolate it from the international community, and will transform them into the global villain that killed the Paris Agreement. You will likely attribute this irresponsible decision to the ‘crackpot’ politics of Trump.

But if you review the US government’s history in the global climate negotiations, you will realize that the problem is not just Trump.

From Kyoto to Paris

Let us recall the Kyoto Protocol, the first international agreement that committed countries to cut their climate change-inducing GHG emissions. It was adopted in 1997 with 192 signatory countries and took effect in February 16, 2005. The Protocol mandates world leading economies to cut their GHG by at least 5 percent below existing 1990 levels before 2012.

The US, at that time the top global polluter, was the only industrialized country that did not ratify the Protocol. In 2002, the US Senate unanimously voted (95-0) against the agreement and withdrew from the Protocol.

Another industrialized country, Canada, rescinded its commitment from the Protocol in 2011, with the reason that the agreement is not working. 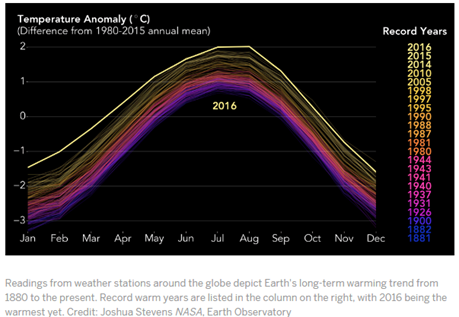 Indeed, the Kyoto Protocol failed to cut the global emission. In 2012, global carbon dioxide (CO2) emissions were at 31.7 giga tons. This represents a 1.2-percent year-on-year increase in emissions, about half the average annual growth rate since 2000 according to an International Energy Agency report. Global emissions soared by nearly 40 percent from 1990 to 2009.

The parties thus decided to extend the deadline of Kyoto Protocol until 2020, an extension targeting 18-percent carbon cuts on 1990 levels.

The Paris Agreement followed in 2015 with the goal is to keep global temperature rise below 2°C above preindustrial levels by the end of this century, with a limit of 1.5°C as a more aggressive goal. The emission reduction commitments by parties, however, are merely voluntary. As with one of the main problems of the Kyoto Protocol, those who will not meet their Paris Agreement commitments will not be legally accountable.

A villain all along

Scientists say global temperature rise should not increase higher than 1.5°C by year 2100 if we are to avoid devastating climate impacts both to the biosphere and to humankind. Yet based on current global emission rates, the world is in a pathway to an average temperature rise of 3.6 and 5.3°C.

Throughout the international climate negotiations, the US has been very active in delaying and countering a meaningful and responsive climate agreement. Along with other industrial and polluter countries like the European Union, China and Japan, the US dominated the content of the Paris Agreement which generally favors their capitalist interests.

The Paris Agreement does not recognize and hold accountable the historical responsibility of big capitalist countries like US, EU and Japan. It does not oblige giant multinational and transnational corporations to reduce their emissions. It does not recognize the role of military industrial complex and the fossil fuel-driven wars waged by industrialized countries as factors in climate change and global warming. It does not impose climate reparations for countries and corporations that have afflicted climate-vulnerable nations with loss and damages.

The international community is forced to accept a watered-down climate agreement or have none at all. The agreement entered into force on November 4, 2016 during the 22nd Conference of Parties in Morocco. As of now a total of 148 states have ratified the Paris Agreement including the Philippines.

History, as what is bound to happen if we do not learn from it, has repeated itself. The US, after signing the Paris Agreement in 2015, again refrained from ratifying the climate treaty.

This is not a lone precedent. The US also did not ratify or commit to other past strategic international agreements regarding environmental protection like the 1989 Convention on the Control of Transboundary Movements of Hazardous Wastes and Their Disposal and the 1992 Convention on Biological Diversity.

Trump or no Trump, the US government remains the top villain against the effort to protect our planet and ensure the survival of the humankind.

Clemente Bautista is the national coordinator of the Kalikasan People’s Network for the Environment, a national environmental campaign center established in 1997.