Who is the real “pasaway”? 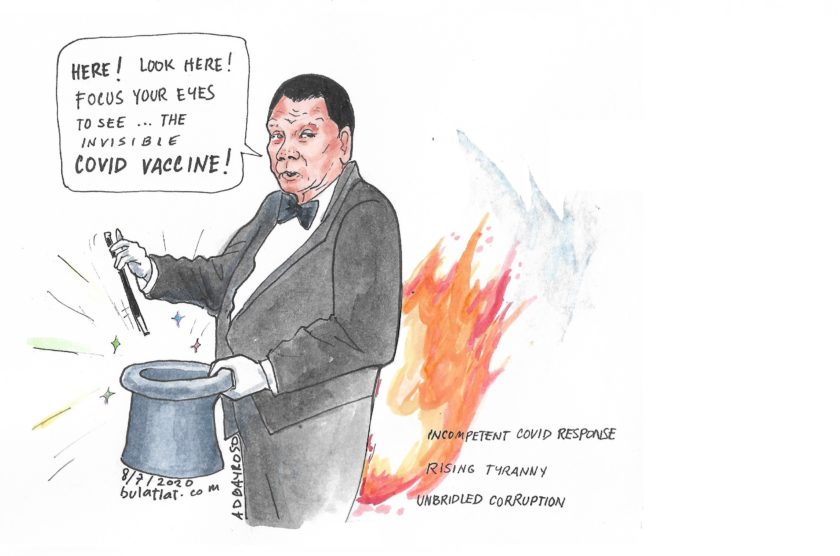 President Rodrigo Duterte, his alter-egos and paid trolls have been blaming Filipinos for being “pasaway” (stubborn) amid the pandemic.

When medical frontliners complained about the increasing cases of COVID-19 in the country and the health system nearing collapse, Duterte scolded them and even dared them to stage “a revolution.”

While the Duterte administration has implemented a two-week stricter lockdown, other legitimate demands raised by medical experts have been largely ignored. It must be pointed out that many of the recommendations have been articulated by several health NGOs since day 1 but, unfortunately, these have fallen on deaf ears.

The viral photo of two medical professionals sleeping on the corridor wearing personal protective equipment (PPE) shows the problem of hospital workforce deficiency. As early as April, the Filipino Nurses United, for instance, called for the hiring of at least 42,000 nurses (or one per barangay) who can help in education drive and contact tracing, as well as in assisting residents who need to be isolated. Four-thousand more nurses are needed to be hired in government hospitals, FNU said. The Department on Budget and Management, meanwhile, approved the hiring of 15,757 health workers under a contract of service for a period of three months.

On March 20, the Department of Health did not yet see the need for mass testing. But due to public clamor, the DOH announced it would conduct mass testing starting April 14 but only for elderly people with pre-existing ailments, the severe to critical cases, frontline health workers and those who have symptoms and had recently traveled or had been exposed to persons found positive for the virus.

As early as March, advocacy group Community Medicine and Development Foundation has been pushing for reverse transcription-polymerase chain reaction (RT-PCR) test kit or diagnostic test for accurate results. The group said that rapid testing yields 40 to 50-percent false negative. False negative means that an individual may get a negative result even if he or she is COVID-19 positive. Still, due to lack of a national comprehensive plan, local government units and the private sector have resorted to rapid testing.

With regard to transportation safety, the Duterte administration has banned traditional jeepneys even if they are safer compared to the airconditioned and enclosed “jeepneys” (which are technically mini-buses) being endorsed by the government. The metro trains, also enclosed, were allowed to operate and over 280 of MRT-3 personnel were infected by the virus.

Again, the Duterte administration has no plan to ensure safe transport for medical frontliners and ordinary workers when it eased the lockdown restrictions last May.

The same goes for workplace safety. The Duterte administration’s passing on the burden to the companies to test their own workers amounts to outright neglect. The Institute for Occupational Health and Safety Development (IOHSAD) said that the return-to-work policies given by the Department of Trade and Industry and the Department of Labor and Employment “is a formula for disaster.”

“No mass testing, lax policies on workplace safety, policies that will undermine workers’ health, and lack of employers’ and government accountability. We fear that with these policies, many workers will be infected and die,” IOHSAD said when the enhanced community quarantine (ECQ) was lifted in Metro Manila.

As to public compliance with self-protection, it was only this month that the administration announced it would provide face masks to the poor. Again, urban poor group Kadamay has long called for hygiene kits, access to clean water and nutritious food. Now, government has also required the wearing of face shields in public places.

As they called for a timeout, medical frontliners also appealed for social amelioration for the poor. Duterte, however, said government has no more money. “I cannot give anymore food and money to the people,” he said.

This brings us to a very important question, “Where has all the money gone?” A total of budget of P606 billion ($12.264 billion) has been allocated for the COVID-19 response.

The government announced that beneficiaries of SAP will receive P5,000 to P8,000. On the average, however, a beneficiary family only received P5,611, according to independent think-tank IBON Foundation. This is equivalent to just P11 per person over the last four months.

Filipinos complied with a two-month hard lockdown but the Duterte administration wasted it by not implementing urgent measures proposed by the World Health Organization, scientists, health advocates and critics. The call, “Solusyong medikal, hindi militar” (Medical solution, not militarist response) has been clear since day 1.

But the real “pasaway” in Malacañan Palace, along with his military generals, does not comprehend the message up to now.

We cannot let this government dilly-dally as our health workers dwindle in numbers. For our collective survival in the midst of this crisis, we must continue to protest the inefficient and unscientific approach to the COVID-19 pandemic. The “pasaway” who chooses to wait for the vaccine to come must be shaken by the people’s rage.