You Are Here: Home → 2022 → November → 19 → Balik-Tanaw | The solemnity of our Lord Jesus Christ, king of the universe of monarchs, an encyclical, and salvation in poetry

Balik-Tanaw | The solemnity of our Lord Jesus Christ, king of the universe of monarchs, an encyclical, and salvation in poetry 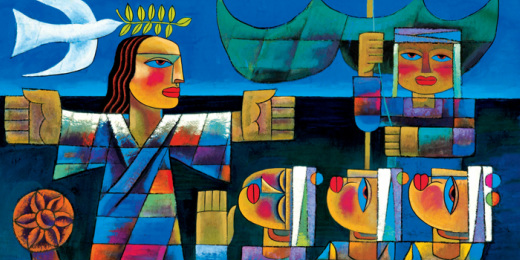 By WEENA SALVADOR MEILY
Hosea Hermitage of the Hear

For centuries, monarchs have played a significant role in the civil and political life of a people. Its presence has either inspired its nation or caused so much suffering. There are evidences of dungeons in castles to torture subjects who do not give in to the whims and caprices of the King. There are stories of monarchy known to have given up life for charitable acts, deep spirituality, and saintly persuasions setting a new path for following Jesus, their beloved. From flag-waving-for-the-monarchy fanatics to enlightened-taxpayers-who-question-their -extravagant lifestyles, it is clear that monarchs of this world have imposed a presence that may be relevant or irrelevant for the people of our times.

In the Philippines, our Pre-Spanish Conquest People-of-the-Islands did not live in kingdoms. We are a people of small islands, an archipelago, to be exact, governed by local leaders, concerned about the problems and issues of everyday life – planting, harvesting, medicinal cures, a culture replete with a system of writing, literature, music and the cycles of the heavens. In other words we are a flourishing civilization! And so, kings and kingdoms were so foreign and remote a notion that perhaps confused some minds when the West arrived, imposed its culture and conquered our ancestors.

In 1925, Pope Pius XI first instituted this feast of Christ the King with his encyclical “Quas Primas” (‘In the first’). His primary objective was to bring a certain understanding among nations divided particularly by the influences of militantly secularistic regimes that threatened not only the Catholic Church and the faithful, but the whole of life itself. The gift of hope was the highlight of this feast. The people suffering from these regimes were assured that while governments may crumble, Christ who is King of the whole of the Universe shall forever reign. (USCCB, About Christ The King, www.usccb.org ) While indeed, throughout the world’s history, fascist and tyrannical regimes have crumbled, cruel governments are still clinging to power through the support of arms deals, power brokering, drug-human trafficking and maintaining shell companies.

In the Philippines, it is a known fact, that the present government is an unholy alliance with dubious powers and personalities that have continued its efforts to resurrect a once crumbled dictatorship. Everyday life is witness to the people’s suffering. In its paper released in Nov. 2, 2022, Ibon Foundation asserts that “substantial emergency cash subsidies or ‘ayuda’ will be more immediate and effective to help Filipinos cope” with the “rapidly rising prices of food and other basic goods and services”. “This contrasts with relentless increases in spending on infrastructure, military modernization, dubious confidential and intelligence funds and debt service”. To make matters worse, as rubbing the people’s wounds with salt, rights activists are disappearing, journalists are silenced, and the senseless war on drugs continue to rear its ugly head on the innocent. Ibon further asserts that “the government’s spending priorities need to be fixed, social protection needs to be expanded to help families and sectors in need.” (please read more, www.ibon.org )

Truly, Christ as King of the Universe, Christ as the highest power over all these powers wielding its atrocities over the weak and vulnerable, is a powerful symbol for people suffering in subjugation from authorities. Faith in a higher power or in ‘higher forces’ (Phil Stutz, MD), has always been the shield of those living on the edge. In the Old Testament, the Creation Story was written to defend the belief of the Jews that there is a higher power, one Creator who made the heavens and the earth, the stuff that the non-Jews asserted as the powerful sun-god, moon-god, etc. In other words it must have been a warring feat. Hence the encyclical of Pope Pius XI, to give hope to those suffering the indignities of tyrannical rule.

At this point, I would like to share how I perceive this inspired notion, “Christ as King”. Christ as King? I had a difficult time coming to grips with this. Jesus… as King? Of course, besides the Catholic teaching of God as omnipotent, omniscient and omnipresent, the teaching of the triumphant Christ , emerging victorious as after a triumphant battle with the Enemy comes as just and fair, since His death on the cross is perceived as saving power. (Read the gospel today, Lk23:35-43) But to my mind and heart, this death and resurrection is indeed a seal, as a seal of a monarch or a leader of a nation stamped on a decree or proclamation. Nothing is written and yet, the Word is enough. The cross and empty tomb are enough. The witnessing of life is enough. Love is enough. Here now is a piece of poetry I wrote (a queer thinker I am) after looking at the two opposing poles of Jesus, human and divine…

I saw my muddy feet deep in the land of my ancestors, dancing,

Walking a path apart from the pathways of the world.

I saw my muddy feet enlarged, made so by the weight I carried

my mothers, my daughters, our stories, our tears.

I saw my muddy feet criss-cross the path upwards, spiraling,

Circling, engulfed by the music of drums, and flutes, and gongs and strings.

I saw my muddy feet bring me to that hallowed ground

Where gods and goddesses once trod.

Then my muddy feet led me to the One called Christ, who sits

Lifting up His arms, as if ready to embrace.

I saw others with muddy feet too,

and this Christ who

these feet, these poor insignificant feet!

This Christ is my beloved, my song of songs

The One who serves, teaching how to serve,

This Christ, this is all-love. This is King because …

He cleansed my muddy feet.

And so, the only way to topple the tower of tyranny is to love. To die for love. To experience a certain conversion of life. A daily spiritual battle of beginning again. To rise after a fall. To love the gospel values that Jesus once lived as a human being, to feed the hungry, clothe the naked, visit the sick, comfort the lonely, give water to the thirsty, heal the wounded, love all. Hence Jesus earned His kingship. To remember that Jesus Christ is King only because He was servant.