From his humble beginnings as a sugar worker, City Councilor Abelardo R. Ladera emerged as one of the few successful local political figures who openly stood against the Cojuangco-Aquino dynasty in Tarlac. Ladera was gunned down at high noon of March 3 making him Tarlac’s first local official assassinated in the post-dictator era.

A leader of the Bayan Muna Party-list Tarlac provincial chapter, Ladera – Kagawad (councilor) Adel to friends – was gunned down in cold blood by still unidentified assassins at around 1:40 p.m. of the same day while buying spare parts for his jeep at an auto supply shop in Barangay (village) Paraiso, this city.

Ladera was pronounced dead on arrival at the Central Luzon Doctors Hospital in this city. He died from a single bullet wound in the left chest near the armpit.

The 5-km funeral march set off from the Arceo Funeral Homes in Barangay San Francisco to the victim’s home in Barangay Balite. Balite is one of the 10 villages comprising Hacienda Luisita – the 6,443-ha sugar plantation owned by the powerful Cojuangco-Aquino clan, some 120 kms north of Manila.

As the march approached the entrance leading to the hacienda, hundreds of other mourners converged with the marchers. Men and women, young and old, fought back their tears as they tried to touch the casket. “Totoo nga, wala na si kagawad” (It’s true, our councilor is gone), they said. 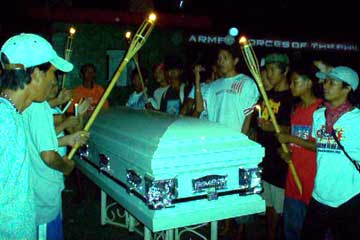 THE PERPETRATORS? Mourners from Hacienda Luisita hold an indignation rally in front of the Nolcom headquarters (Photo by Dabet Castañeda / bulatlat.com)

A short indignation rally was held in front of Camp Servillano Aquino, headquarters of the Philippine Army-Northern Luzon Command (Nolcom) along Mac Arthur Highway, just across the entrance leading to the hacienda. Elements of Nolcom have been tagged by some groups here as the perpetrators of the crime.

On Nov. 16, 10 days after the strike began last year, seven sugar farm workers and their supporters were killed at the picket line in front of the CAT’s Gate 1 in what is known today as the Hacienda Luisita Massacre. Scores of others were also wounded as the police and military tried to break the picket line following an order from the Labor Secretary Patricia Sto. Tomas. 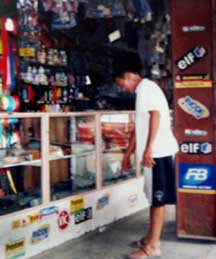 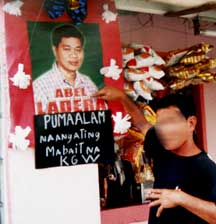 CRIME SCENE: A supporter (top) points to where Ladera was gunned down March 3. A fitting tribute (above) to Kagawad Abel, the man of the masses. (Photos by Dabet Castañeda / bulatlat.com)

Almost a month later, on the night of Dec. 8, peasant leader Marcelino Beltran (Ka Marcing) was also gunned down in front of his house in San Sotero, Barangay Sta. Ignacia, also in Tarlac. A retired soldier of the Philippine Army, he was a key witness to the Nov. 16 massacre.

In an initial report March 3, investigators from the national police’s Third Regional Criminal Investigation and Detection Unit said that Ladera’s killing was seen by at least five witnesses.

One of them, police said, saw a “dark blue color van slowly passing by before parking by the shoulder of the road, about 20-30 meters away from the auto supply.” The same witness told Bulatlat that the assailants may have used a double-action bullet as it blew up twice, once after the shot was fired and another when the bullet hit the victim’s body.