The Arroyo government fleeces them of their savings before they could work abroad. From the 76 documents required of them, OFWs are charged P17,665 ($399) each, netting for the government around P2.92 billion ($66,018,539) a year. While working abroad, the government charges them for documentary stamps 15 percent for every remittance transaction. Thus, with the $14.45 billion in remittances coursed through the banking system last year, the government earned $2.1675 billion. Remittances of OFWs prop up the dollar reserves of the country, and are being used as guarantee for loans by the government. But what kind of service do OFWs get in return?

Overseas Filipino workers (OFWs) are being dried out before they can start to work abroad.

According to Migrante International, 76 signatures are needed for 76 documents before they can get their passport. These include Community Tax Certificate (CTC), barangay clearance, birth certificate, National Bureau of Investigation and police Clearance, among others. Each document cost from P50 to P100 ($1.13 to $2.26 at an exchange rate of $1=P44.23) or more. An OFW shells out around P17,665 ($399 at an exchange rate of $1=P44.23) in government fees alone before being able to leave for abroad. The following table shows the breakdown.

Filipinos hoping to work abroad will also have to pay additional charges for recruitment agencies.

The Philippine government also charges a 0.15 percent documentary stamp tax from every remittance transaction of OFWs.

With the unprecedented oil price hikes and increases in prices of basic commodities, there has been a surge in OFW remittances.

Data from the Bangko Sentral ng Pilipinas (BSP) show that overseas Filipinos remitted $14.45 billion through the banking system last year. “That amounts to more than US$30 million in remittances daily,” said Monterona. In documentary stamps alone, this amounts to $21.675 million collected by the Arroyo government. 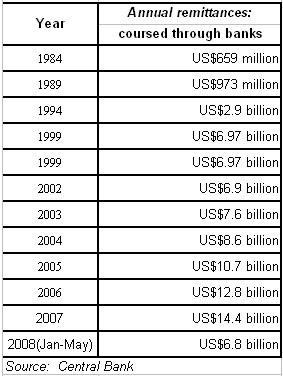 Monterona added that in 2006, OFW remittances are more than double the total allotment for the government’s external debt service, five times more than foreign direct investments (FDI), 22 times higher than the total Overseas Development Aid (ODA) and even more than half of the gross international reserves. He said that like previous administrations, the Arroyo regime is making OFW remittances a guarantee for more loans from international banks and financial institutions.

Migrante International said that despite the revenues earned by the Philippine government from the sweat of OFWs, Filipino workers remain neglected.