IBON Foundation revealed that debt service increased by 100 percent from 2001 to 2005. The independent think-tank estimated that during the same period, $48 billion had been paid for debt, equivalent to 11.8 percent of the country’s gross domestic product (GDP) each year. 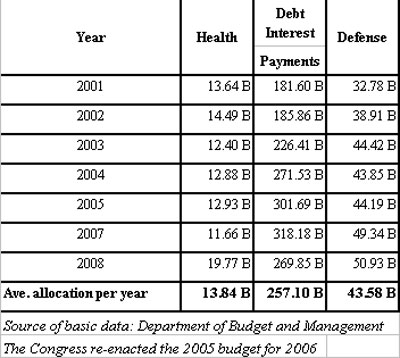 Due to the meager budget for health, government hospitals have imposed charges such as operating room deposits, emergency room fees and laboratory fees.

Based on a primer released by the Council for Health and Development (CHD), a national organization of community-based health programs (CBHPs), the PGH charges P1,500 ($33.91) for the use of its operating room and Jose Reyes Memorial Hospital charges P3,500 ($79.13) for the same item.

The CHD further revealed that patients at the National Kidney and Transplant Institute (NKTI) are suffering because of the hospital’s “no pay, no hook policy” referring to the hospital’s policy of not giving dialysis treatment to patients who cannot pay the treatment. One dialysis session at the NKTI costs P2,700 ($61.04). A patient with a serious kidney problem usually has to undergo dialysis treatment twice a week.

The health group also said that patients in public hospitals have to pay even for the cotton balls, syringe and gauze they consume.

Indeed, health services in government hospitals have become prohibitive for many of the country’s poor.

Sixty-one percent of the respondents of the survey are unemployed, 27 percent are low-income earners while the remaining 13 percent are low-income professionals. The survey results showed that 76 percent of the respondents have to borrow money from friends and relatives, sell their property or beg for mercy from charitable institutions to be able to pay the expenses they incurred while in the hospital.

The April 2008 survey by IBON Foundation also showed that 73.38 percent of families are having difficulty paying for medicines and treatment.

Even the Philippine Health Insurance Corporation (PhilHealth) cards prove to be insignificant, the CHD primer stated.

The PhilHealth claimed to cover 80 percent of the population. 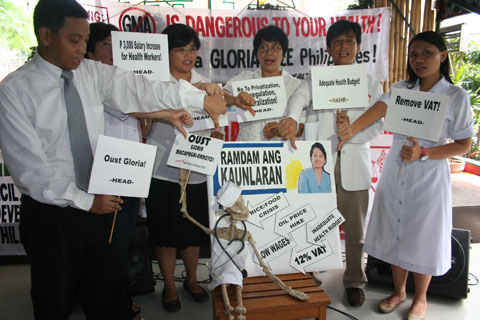 According to Dr. Gene Nisperos, HEAD vice chairperson, the National Institute of Health maintained that the PhilHealth’s claim of coveragehealth sit is overestimated by at least 20 percent.