It was not in the job description but kissing the drunk owner of an 18-year-old rubber boots and shoes factory in Muntinlupa was the first thing women workers had to do when they report for work at six in the morning. They lined up not just to have the timecard punched. They lined up to be harassed.

It was not in the job description but kissing the drunk owner of an 18-year-old rubber boots and shoes factory in Muntinlupa was the first thing women workers had to do when they report for work at six in the morning. They lined up not just to have the timecard punched. They lined up to be harassed.

Bleustar Manufacturing Inc., maker of Advan boots and shoes is located at the RMT Compound in Tunasan, Muntinlupa City. It produces as much as 10,000 pairs of rain boots and shoes daily. Eighty-five percent of its 205-strong workforce are women who work mostly in the sewing department. All of them were virtually subject to the sexual advances of its owner, Mr. Jimmy Ong.

Gloria Bongon, vice President of the Bleustar Workers Labor Union related, “He would arrive at the factory sometimes as early as 4:00 a.m., extremely drunk. His car would be parked right at the factory’s gate so that when it was time for us to enter and punch in at 6:00 am, we would have to line up to kiss Mr. Ong.

Liza Malimata, vice auditor of BWLU estimates that at least 90 percent of women workers at the Bleustar had been harassed by Mr. Ong. “Every woman who had to report for work early in the morning had no choice but to kiss Mr. Ong. You’re considered lucky if you had to report at 10 a.m. when Mr. Ong would most likely be at his office or asleep.”

But even then, there were times when Ong would make his rounds. When he does, women workers would leave their posts and go to the comfort rooms or hide in cabinets or under the tables. “We all wanted to avoid him,” said Malimata.

Malimata narrated that at one time, Ong summoned her and right in front of over a hundred employees at the sewing department, he offered a promotion and asked if she would kiss him. “I immediately refused the promotion. I refused outright and told Mr. Ong I would not be shamed in front of my co-workers and my husband who was also in the same department. He retorted I should kiss him when my husband is not around. It was embarrassing.”

“We didn’t like it. Nobody liked it but we had no choice. We all feared we would lose our jobs,” said Bongon who said that in July of 2006, she had been asked by Ong outright to touch his private parts.

“He was drunk and put operations to a halt at 10:00 am. We then decided to go home and as I punched out my time card, he shouted and asked that I approach him. At first he said he wanted to know if I was the one responsible for trying to organize a union in the factory. I denied this and asked if I can leave. He ignored my request and said it was good that I wasn’t starting a union. At that point, he pulled his zipper down and grabbed my hand. He asked if I would touch him as he tried to bring my hand closer to his private part. I was able to pull away and ran toward my co-workers outside. I was shocked and shivering,” recalled Bongon.

Bongon said that even as these incidents would be reported to their immediate supervisors, they were often told that Ong’s advances were part of his fatherly affection and that they could just wash it off. “Nadadaan naman ‘yan sa paligo!” (You could just take a bath.)

“For over a decade, it was tolerated and even encouraged by the management. We had no union and we didn’t know where to turn to. Not one sexual harassment case was filed against Mr. Ong,” Bongon said. 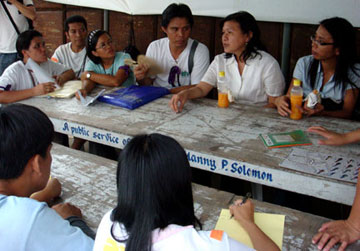 Gabriela Women’s Party Representative Liza Maza said this was not unusual. “As contractualization and unemployment worsen, women find it more and more difficult to find their voices inside the workplace. They risk losing their jobs. Unfortunately, the existing law against sexual harassment has failed to curb the commission of the crime in workplaces.”

The bill seeks to expand the definition of harassment to include those committed outside the workplace. It likewise amends Section 4 of the existing law where “the employer, head of office in a work-related, education or training environment or institution shall hereby be mandated to adopt a comprehensive, detailed, written policy on sexual harassment and so that there shall be a 48-hour deadline within which to act on complaints against sexual harassment in these places.”

In the proposed law, the employer or head of the office is presumed to have knowledge of a sexual harassment act or acts if: the management failed to act on the complaint within the period provided for in the preceding section; a complaint was made before the committee or authority designated to receive complaints or investigate cases as provided in the rules and regulations; and the harassment is openly practiced or well-known among employees, students or trainees.

The Gabriela Women’s Party said, “Crisis begets violence. Women become all the more vulnerable to gender violence, sexual abuse and harassment in the midst of poverty. Women workers would have no other choice than to endure these sexual advances rather than face joblessness. In the workplace, violence against women becomes all the more prevalent in the absence of a women’s committee or worse, in the absence of a union.”