Why do they risk death to defend human rights? For Karapatan workers, it’s the way to live.

“What is there in these people to work in the way they do? Perhaps, the biggest reward they could get is a hug from a victim… It really goes against human nature to go against self-preservation but these people risk their lives.”

Mrs. Edita Burgos, mother of the disappeared activist Jonas, said these words, referring to members of Karapatan (Alliance for the Advancement of Human Rights), during the group’s 13th anniversary celebration.

Karapatan was formed in a congress on August 17 to 19, 1995, at the Bulwagang Plaridel of the Polytechnic University of the Philippines (PUP) in Sta. Mesa, Manila.

On its 13th year gathering, held on August 20 at the Claro M. Recto Hall in the University of the Philippines, Diliman, Marie Hilao-Eniquez, Karapatan secretary general, recalled the context by which the group was founded.

She said that during the Aquino administration, there was disorientation among human rights workers, especially with regards how they view human rights and the situation then. “Many thought the Aquino, being the wife of a victim of human rights abuses during martial law years, would bring forth the promotion of the people’s rights.” 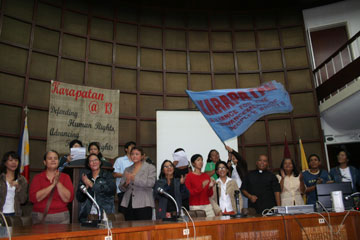 Benjie Oliveros, who was with the Task Force Detainees of the Philippines and the Ecumenical Movement for Justice and Peace then, added that the Aquino government implemented some political reforms in response to the demands of the anti-dictatorship movement that ousted Marcos such as the release of political prisoners, the restoration of formal democratic rights, and the creation of the Presidential Committee on Human Rights with the late Sen. Jose W. Diokno at the helm. But it did not implement fundamental reforms. She did not even repeal the repressive decrees of the Marcos dictatorship; and human rights workers failed to see this.

Enriquez continued, “Her government proved to be a restored elite democracy. She was no less the representative of the ruling class. It was not long before she unsheathed the ‘sword of war’ against the people.”

Enriquez said that Aquino implemented a vicious counter-insurgency campaign patterned after the “low intensity conflict” strategy of the US government. A fact finding mission headed by former US Attorney General Ramsey Clark in 1987 found striking similarities between the counter-insurgency strategy employed by the US in Vietnam and that of the Aquino government.

The succeeding regime of Fidel Ramos employed a soft approach to the insurgency, Enriquez said. This included an amnesty program and enticing the Moro National Liberation Front (MNLF) into a final peace agreement. It was also Ramos who first employed Special Operation Teams, small teams of soldiers specializing in psychological warfare.

Enriquez added, however, that the Ramos regime’s counter-insurgency programs Operation Lambat Bitag 2 and 3 in Cagayan Valley and Negros brought about many human rights violations.

She noted that Ramos’ globalization policies wreaked havoc on the lives of the people, violating the people’s socio-economic rights.

“This was the backdrop by which Karapatan was formed,” said Enriquez.

She recalled: “In 1994, we walked out of the Congress of the Philippine Alliance of Human Rights Advocates (PAHRA).”

She said that PAHRA leaders had developed a different view on human rights.

Enriquez explained, “Human rights do not exist in a vacuum. It must be viewed in the context of social and political situation.”

She added, “We are always biased for the victims, never neutral. Human rights workers must work within the people’s movement, not above it.”

Prof. Sarah Raymundo of the Congress of Teachers for Nationalism and Democracy (CONTEND) said that Karapatan, unlike other human rights groups, has a comprehensive understanding of rights to include economic, social, civil and political rights. “Saklaw nito ang karapatang pang-ekonomiko para magkaroon ng buhay na may dignidad,” (This covers economic rights so that people could live with dignity.) said Raymundo.

Enriquez said that 11 out of 13 regional chapters of the Task Force Detainees of the Philippines (TFDP) became the backbone of Karapatan. Only the chapters in the National Capital Region and Southern Mindanao remained with PAHRA.

She also recognized the contribution of Samahan ng Ex-Detainees Laban sa Detensyon at Para sa Amnestiya (SELDA), an organization of political prisoners, and the Ecumenical Movement for Justice and Peace (EMJP) to the early years of Karapatan.

Enriquez said that even before the founding congress of Karapatan, its flag was unfurled several times during protest actions at the Office of the Presidential Adviser on the Peace Process (OPAPP), at the National Bilibid Prison (NBP), at the Department of Justice and during the arrival of the Papal Nuncio. She said Karapatan had to voice out its position on pressing issues.

She recalled that in January 1995, political prisoners staged a hunger strike to demand the immediate release of the elderly and the sick. She said that 45 prisoners were successfully released. “Karapatan carried the most progressive position on the issue of political prisoners,” she said.

In May 1995, Enriquez related, Karapatan and its member organization Migrante went into the limelight after a picket at the Singapore Embassy in support of Flor Contemplacion.