In her solidarity statement, Mrs. Burgos said, “Karapatan came to be because there was a vacuum; there was a need to defend human rights.”

Enriquez said the founding congress was held with the full support of then PUP President Dr. Nemesio Prudente.

She said that Armando Malay, Romy Capulong, Crispin Beltan, Dan Vizmanos, among others, attended to welcome the formation of Karapatan.

In 1997, Karapatan held a national fact finding mission. Karapatan opposed Ramos’ proposed measures such as the Anti-Terror bill and the National ID system.

Karapatan also joined other groups in opposing the attempts of the Ramos government to remove the limitations on the term of the president and other public officials, and the safeguards on national patrimony through a charter change.

Karapatan described the Estrada administration as corrupt and repressive.

Enriquez recalled that due to Estrada’s all-out war in Mindanao, thousands of internal refugees were found in cramped evacuation centers.

Enriquez said that in 2000, Karapatan was the first organization to call for Estrada’s ouster because of human rights abuses.

Enriquez said that in 2001, upon Arroyo’s assumption to power, Karapatan presented to Arroyo the human rights agenda.

“GMA said that all of these would be studied but nothing has been realized,” related Enriquez.

Enriquez said further, “She brought the country back to martial law years. It is as if Marcos never left.”

She said that Arroyo is even worse. “Gross and systematic violations of the people’s rights are committed without openly declaring martial rule.”

Raymundo said that Karapatan considers rights not as an abstract concept but a way of life. “Naisasabuhay nila ang karapatan sa pamamagitan ng pagtataguyod nito (They uphold human rights as a way of life).” 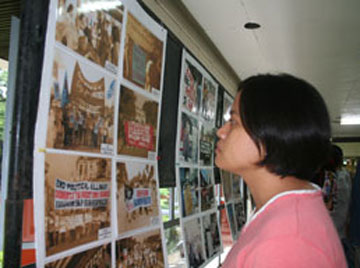 Karapatan has three line works, which include services, documentation, administration, and media liaison.

Burgos spoke about the courage of Karapatan workers who formed fact-finding missions and provided services to victims of rights abuses: “Imbes na magtago, sila pa ang mangunguna (Instead of hiding, they are in the forefront.)…they get abused, they get killed.”

Sen. Ma. Consuelo ‘Jamby’ Madrigal, in her solidarity statement, also commended Karapatan. “You’re the only ones who give your life to a cause.”

She added, “Karapatan members, whether here or in Geneva or elsewhere, show undiminished passion and zeal for the defense of human rights.”

Burgos recalled that it was on April 30, 2007 when she had her first direct contact with Karapatan. They then held a press conference announcing the disappearance of Jonas.

She said it has been 170 days since the day she met Karapatan. “Kung pwede lang, gusto ko katabi ko lagi sila. There is this confidence.”

She added, “Will I find my Jonas? Without Karapatan, it won’t be possible for us to continue.”

Burgos said, “They have the courage that not everybody has. Is it because of the blood spilled by the martyrs?”

A short video was shown as a tribute to 33 slain human rights workers, volunteers, and legal counsels.

When the lights were turned on, most of Karapatan members fought back their tears. They were reminded of their fallen colleagues.

Enriquez said, “We celebrate their lives. Our martyrs will continue to inspire us.” (Bulatlat.com)